My output rate in blogging is way behind than my output rate in taking photos and going on adventures. This was the main reason why I succumbed to the appeal of micro blogging on social media sites. But still I’m the one at fault – if I make time to write up a post to go with the photos without such a delay, I’d be up to date.

No matter, I still have a few favourites from our UK trip so let’s get started.

The flowers, oh the flowers! On the street, up on lamp posts, on public fences, so colourful and pretty and cheerful. The August weather was perfect for them. This was taken near the Edgware tube station when we visited Auntie Anching, Bernie’a aunt.

This is Auntie Anching, older sister of Bernie’s recently departed father. She’s been living in London since the late 70s. I first met her when Viel, our eldest was a few months old. She lives alone but has family and friends near so it’s not as lonely, and scary.

Yes, she is quite a character. Always making jokes and pulling funny faces. 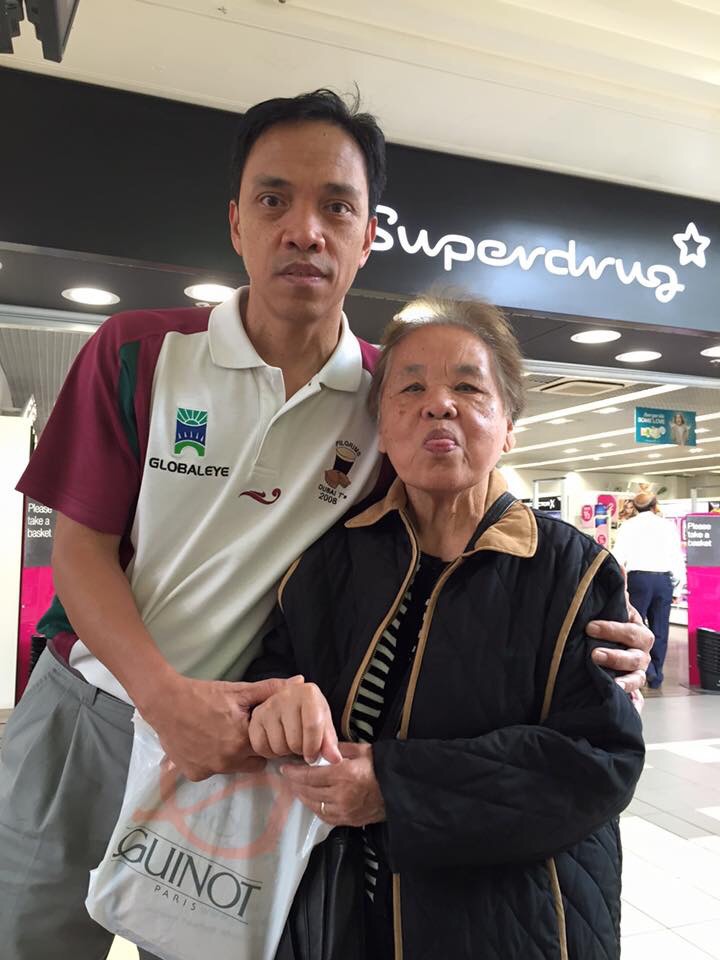 We spent the day with her in her modest apartment. I’m a little ashamed to say that we had Kentucky Fried Chicken for lunch – she loves that stuff!

But then she cooked fresh trout for our dinner, using a traditional Filipino recipe. It was delicious! I had no idea you could cook trout like that either.

And we had tea and raisin biscuits! Patrick has developed a taste for English breakfast tea so he loved being in England! It rained a bit as well so hot tea in the safe warmth of Auntie’s living room was the best thing to do.

When the rain had stopped, we decided to take a walk around her neighbourhood – we promised not to go too far! It was such a glorious day, the sky so blue and the clouds so puffy!

I may have also gotten a bit obsessed with dandelions. 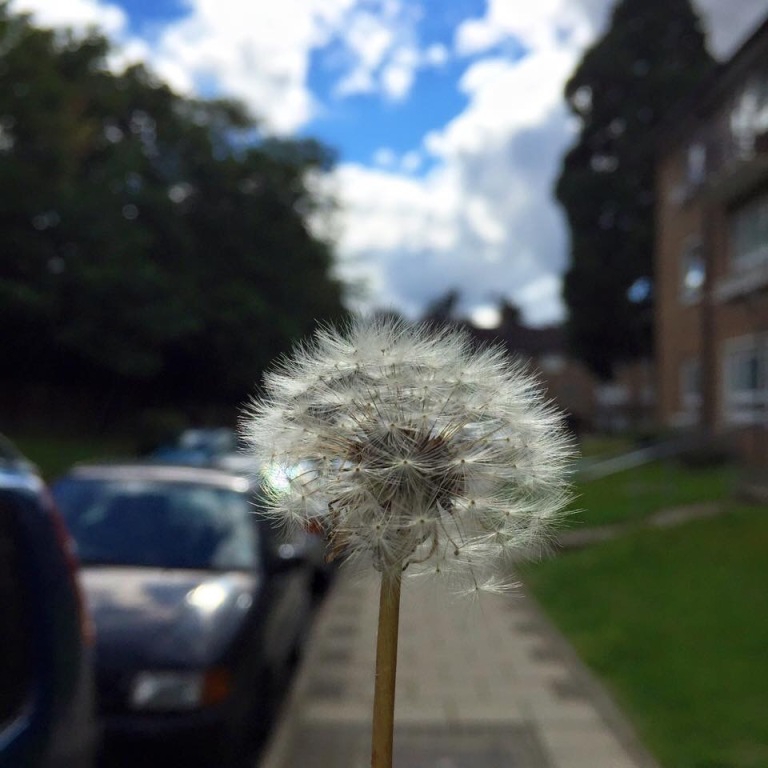 Auntie Anching saw us off at the bus stop and we said farewell. We promised to come back and visit her as often as possible.

And of course there was Paula who gave us probably the most memorable day of our trip: Stonehenge and Winchester. Can’t believe we only have this one photo! Must fix that 😉

Paula also introduced me to pink shrimps, a very sweet, chewy candy. Darn addictive! And the ducks on the river liked them a lot too!

Oh and I made a new friend too! I met The Paddington Bear! Gentle little thing.

London might seem to be an odd place for the UAE Amiras to catch up and knit and buy yarn, but it was actually only logical. And it was a carefully planned meeting too! We talked about it on Facebook, on Ravelry, synched diaries and watches. Maybe not the watches. But I still I got lost at Waterloo tube station and dragged Paula with me because I could not follow Mel’s simple directions! We did make it to our first stop: I Knit London. How many times have I seen that yellow signboard on photos and on their website! And then finally, I was there! 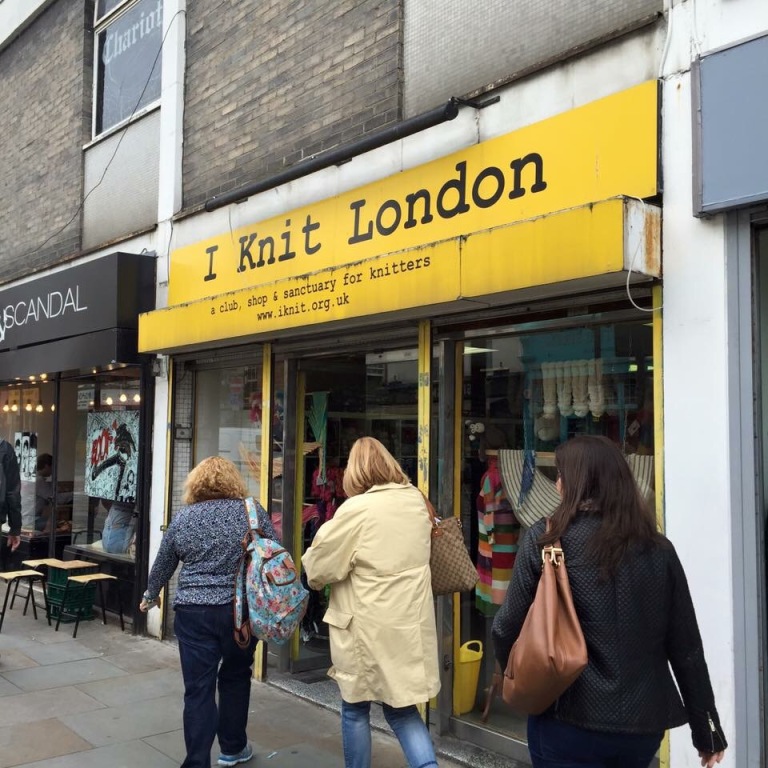 Gerard and his sweet pups Percy and Pandora greeted us in. It was wall to wall yarn, floor to ceiling; I think I might have died a little as soon as I walked into the shop. That’s Gerard in the back, proprietor, yarn dyer, knitter.

Paula did not waste time and started winding the yarn that she bought. Can’t wait to see what this shocking pink yarn turns into!

And yes I was really there! Here I am with Percy and Pan on the couch. I wasn’t trying to smother Percy, I swear. They are so sweet and affectionate. Thanks to Mel for the photo. 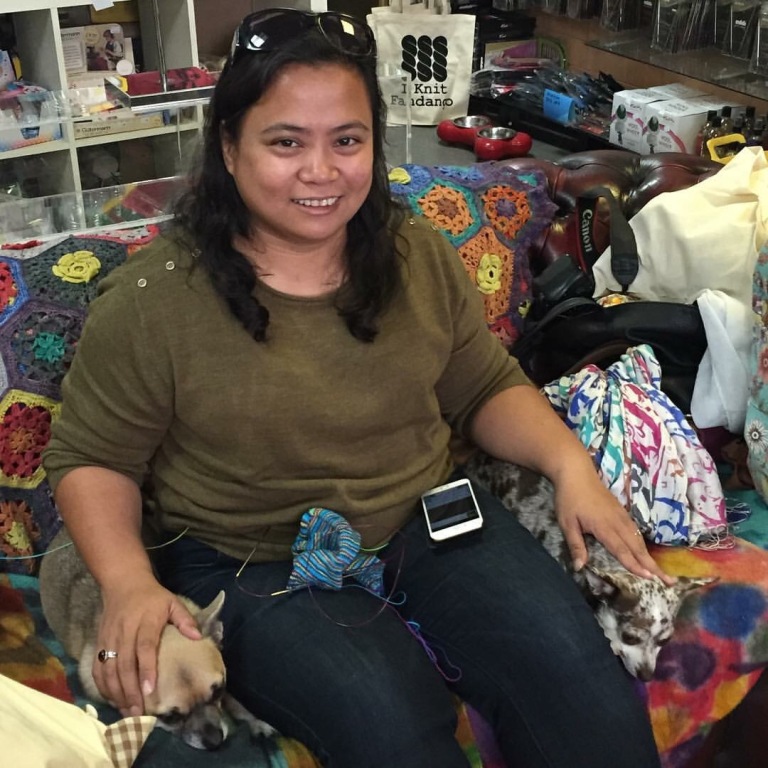 Paula looked like she grabbed a few more skeins when I wasn’t looking! This was on the tube on our way to Angel station, onto our next stop.

It was nearly lunchtime by the time we got out of the tube so Mel took us to The York for a proper pub lunch.

Just kidding. They took a long time with our orders so they gave us a second round of drinks on the house. We might have staggered out of there when we were done. This was my lunch: Gloucester old spot sausages and mash. Yummy! 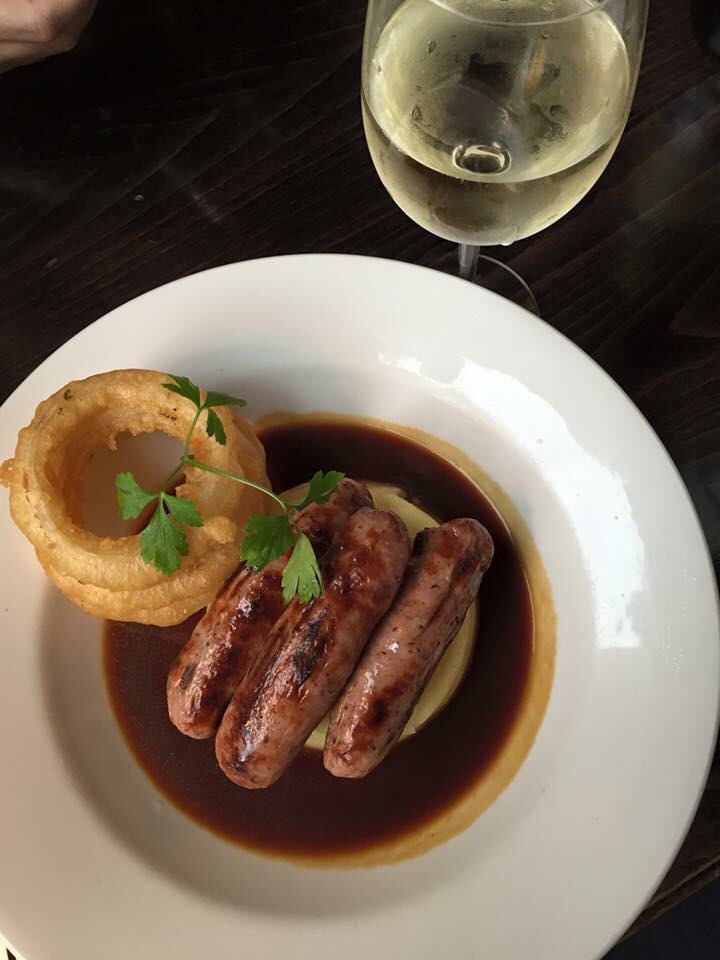 And then it was off to Loop which was just a hop and a skip away.

It’s a quirky shop, smaller than I imagined but cramped full of knitting goodness in every corner! I may have squeed a couple of times: first when I saw the wall of Socks That Rock and called out colourways off the top of my head as soon as I saw them. That was a little embarrassing actually. Next was when I was told the Wollmeise was upstairs! I made a beeline for it rightaway and started petting and inhaling yarn fumes. It was glorious. I did not cram my shopping bag with every skein of Wollmeise though. I was quite restrained. 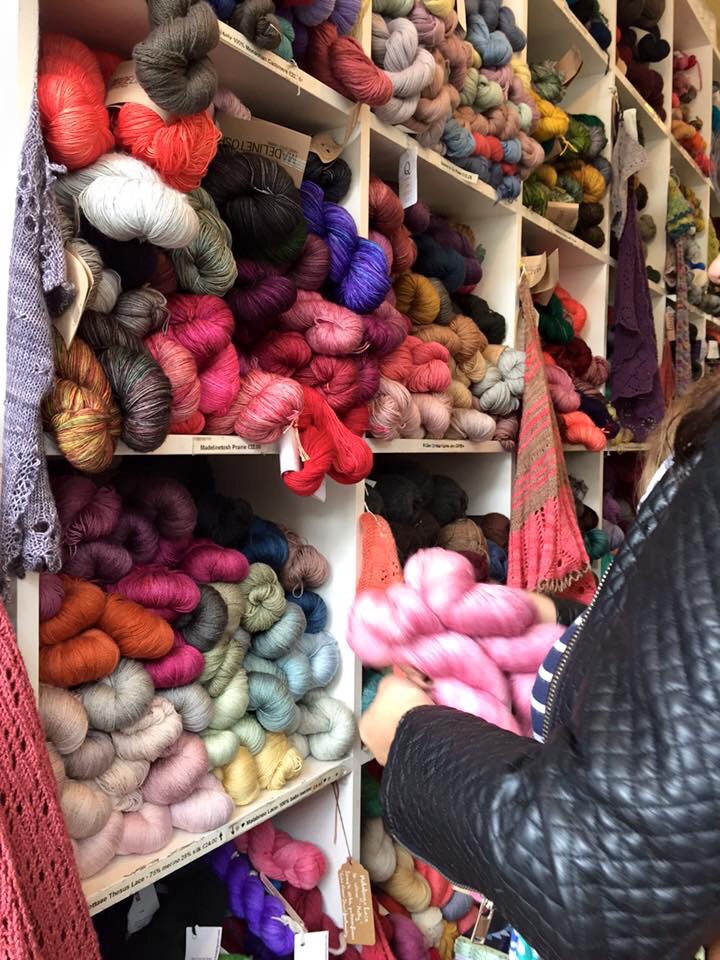 Funny how you always imagine going mad crazy grabbing as many beautiful skeins of yarn when you visit a place you have only ever read about online, but when it happens and you’re actually there in the middle of it, you kinda freeze, not knowing where to begin. That’s exactly where I was. Or Mel in this photo.

That was a fun day. Except when I found out later that Paula slipped when she was going down a plight of slippery stairs at a tube station and hurt her shoulders. 😦

On our last night in the city, we made a stop at our London office on Craven Street. It was the Friday before Bank Holiday and it was payday too so everyone had left and poor Lai was on her own. We got delayed getting there, or we would have met other colleagues as well.

Anyway, I met Lai for the first time last December when she came to Dubai and joined us for our annual Christmas party. Before then, it was all emails and telephone calls and Facebook. Good memories from the party in the desert: getting pushed in the freezing pool (her, not me), jumping into the cold desert at 2 in the morning to make sand angels (both of us) and getting a nasty bruise on the leg trying to climb back up the villa (her, not me)! So I had to go see her and the office and all the fabulous artwork that adorns our office, including this freaky holographic image of HM the Queen.

Lai’s corner of the office – that view might seem nothing but it’s a window to the world outside so it’s good.

Lai meant to take us for dinner at a grill restaurant but somebody forgot to make reservations and the wait was two hours! She took us across the road to Franco Manca instead and it was a fantastic move. The slow-rise sourdough crust was delicious down to the last bite! I’d definitely recommend it and would go back in a heartbeat. I look smashed in this photo but I swear we had not even started drinking wine yet. I was tired and sleepy and hungry. 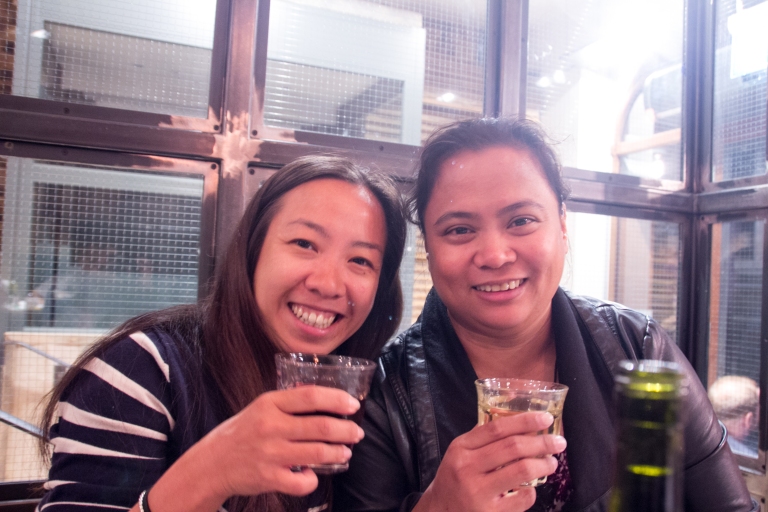 Bernie tried their craft beer which he said was really good and Patrick had a homemade lemonade. The place was packed and tiny and noisy – I love it! Someone had a birthday on another table and the entire place was singing “happy birthday” along. It was brilliant! 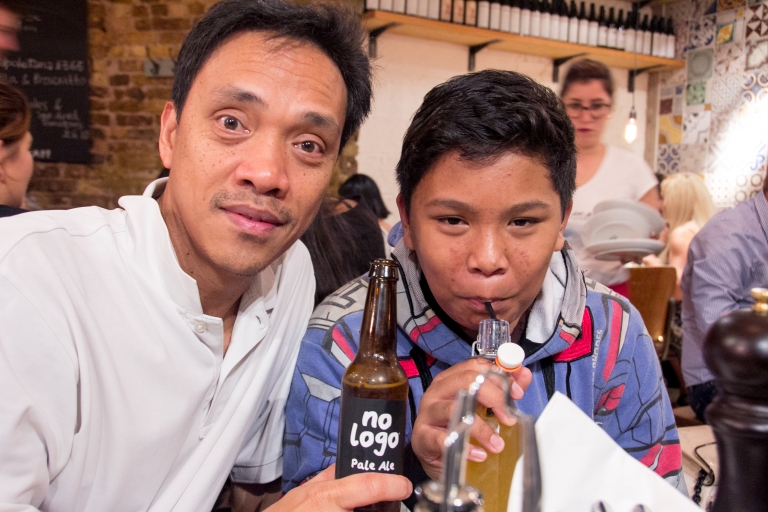 Looking at these pictures make me want to go back to London right now. I bet I would love the weather – finally give all my hand knitted garments a chance to get to work and keep me warm when I need it! Sigh.