One month ago today, I participated in the first sporting event ever as an adult. Well, calling it a sporting event might be too much, it’s just a 10k road race. Anyway, I surprised myself by actually completing it within a decent time. Much respect to the folks in the office who actually ran the 10k and not brisk-walked the entire way. Soon after, we were talking about participating in more sporting, team-building events. One of which was the first ever Spartan Race to be held in Dubai.

We signed up thinking it would be fun to get involved, not realizing it actually requires some sort of effort. And training! We lacked that last one terribly. It wasn’t really until we were in the race that we realized just how serious these obstacle course racers were! Anyway, we put up a team, and at the last minute our boss had to bail due to a hurt leg so I asked my husband to take his place, which Bernie gladly agreed to. First achievement of the day: turning up on time! Yay! 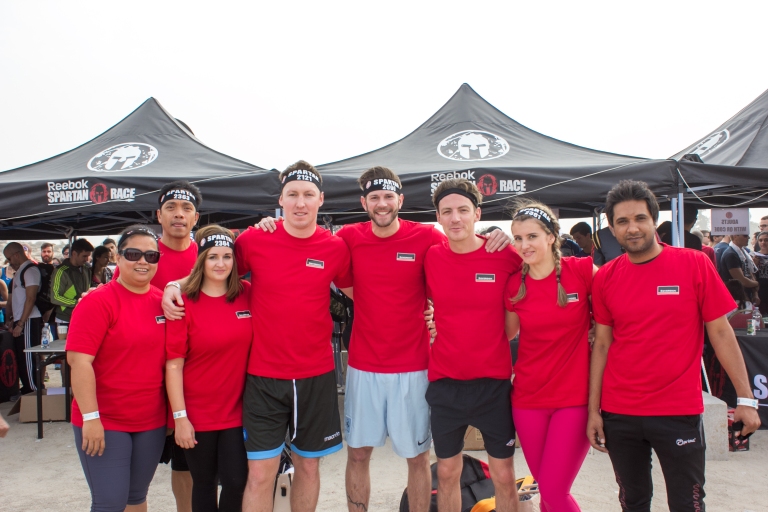 We had no idea the volunteers would be wearing red shirts too. Nikki and I were mistaken for volunteers at least once! We each chose a nickname and number for the back of the shirts to make our team unique. I like it. I like the nicknames. 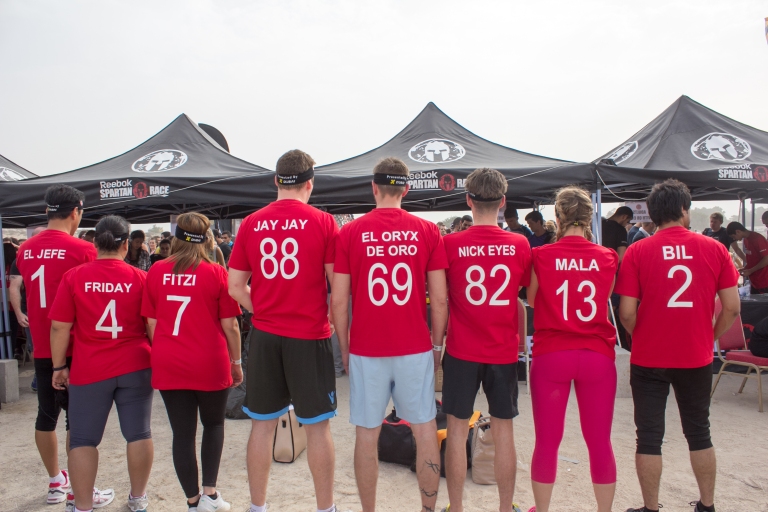 It would have been a very nice day for the race, if not for the massive sandstorm that started moving in. This is how bad it got when we were in the race. Patrick stayed behind minding everyone’s bags and he took this photo. Inside the obstacle course, we had sand in our eyes, nose, ears, mouth, hair….everywhere! But we had to keep moving forward. 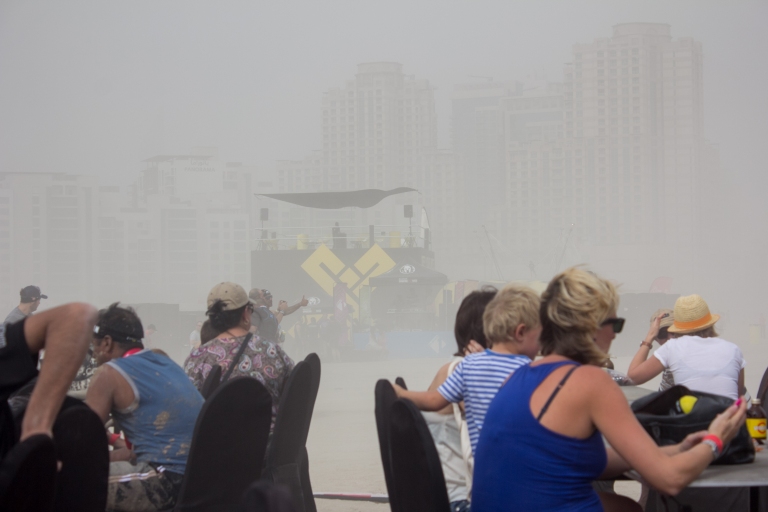 The course was supposed to be the 5km sprint, but it felt a lot longer than that! The obstacles are too few and far between, in my opinion. There was a lot more walking through sand, uphill, downhill, flat, muddy, dry and dusty than anything else. Some people ran across the sand, but I couldn’t be bothered. It was difficult being in the sandstorm as it is, and running has never been my favourite.

The first obstacle was easy, it almost lulls you into a false sense of confidence. That all obstacles would be just as easy. You had to crawl under a net and climb over a short wall, twice. And then there was a water stations after. Then followed I think one of the longest stretches of dirt between obstacles. The next one was a rather high climb, hanging on to scaffolding bars and going over a short bridge to come down on the other side. Someone commented that there was a lack of volunteers there to keep an eye on everyone’s safety. More sand after that, followed by the first mud obstacle. There were 3 mud ditches in between mounds of sand and there was no way of telling how deep the mud went until you’re actually in it. I got through it without any major incident, keeping my mouth closed the entire time! But man, if I was dragging my feet through the sand before, the heavy, wet mud clinging in my feet and shoes made it even more difficult to walk, let alone run!

At the next water station, the volunteers warned us to take a bottle of water as there were more obstacles to follow and the next station was quite far away. The next obstacle had us picking up a sandbag each, 20lbs for the ladies, and we had to climb up a small hill and back down again going around back to the starting point. It was okay but on the way down, the sandstorm started blowing really heavily making it difficult to see anything.

And then there was more sand. We didn’t even think about running, we just walked through the entire thing! The next obstacle was something I wanted to try but didn’t even get around to doing it because I was worried that if I failed, I would have to do 30 burpees! It was the dreaded rope climb. Bernie did it effortlessly and Nikki and I just stood there watching. It was then that two other participants mistook us for volunteers asking how much father until the end. I’m ashamed to say that we skipped this one without even doing the penalty burpees.

The next obstacle was a lot harder than it looked: the lateral climb. We took the farthest wall as there was no queue. Bernie boosted me up so that I could reach the top bit of wood and position myself. I was scared of falling flat on my back so I grabbed as tight as I could onto the pieces of wood, getting a few splinters along the way. I think I gave up with just two more steps to go. I just couldn’t bridge that gap and was afraid of falling so I jumped out. Nikki did magnificently!

I can’t remember now which one came next. I think it was the barbed wire crawl. Usually this is done with mud, but I suppose folks in the UAE are far to delicate to crawl on mud so we had to crawl in dry, hot sand instead. It was not so bad either, you just had to keep your bum down or else you’d get skewered in barbed wire! After that, I believe it was the tire flip. We had to flip these tired four times; ladies had a smaller tire while the men had to flip these huge tires used in big trucks. It wasn’t so bad as you can pool together as much as 4 people to flip one tire.

And then there was another water station! Soon after that was another object carry, this time buckets filled with stones. It would have been effortless if we didn’t have to walk up a steep hill and then come back down again. It gave us time to catch our breath anyway. The next one required team effort again. You had to pull a tire tied to a rope from downhill. And this was where my left leg cramped up! It was a painful son of a bitch! I’m so glad my husband was there – I wouldn’t know what to do if he wasn’t around. Took me a couple of minutes to get back up. My left leg is still pretty sore today but it’s okay.

Next came the vertical wall. It was huge. Nikki and I wondered if there was a little people version, you know for people who are under 5ft 5in? I tried to reach up over the wall, with Bernie giving me a boost on his knee, but I couldn’t pull myself up over so Nikki and I skipped that one too. After that, there were the sand troughs. The technique was to gather momentum on your way down to give you enough of a boost to climb up the next hill. It was actually more fun doing it that way! At this point, we had just 4 obstacles left. The next one was the inclined wall climb. You approached the wall from behind and hoisted yourself up using the bars on the back. It was inclined at about 30 degrees I think so you had to hold on tight! I was determined to do this one, so I got Bernie to help me get on the wall and once I was there it was a matter of getting up and over and not falling off! I think this was where I got those bruises on my arms and legs which appeared the day after the race.

More sand followed, more uphill climbs and then finally at 300 meters out the end was near! The spear throw was next. It was windy and the spear was heavy and we were tired – so many people were doing burpees on the side! I didn’t hit the hay where the spear was supposed to go but it was close so I called it. One more mud pit and then an inclined rope climb followed. I sort of froze at the top because I miscalculated and couldn’t go over the wall. I tried again, this time using all of the rope to get myself up and over the wall and then climb down to the ground. And then it was the fire pit. I chose to jump on one end where the fire had only just started. It wasn’t so bad but because of the way the wind was blowing, the intense heat from the flames followed me as I walked away. I thought for sure my yoga pants were melting! 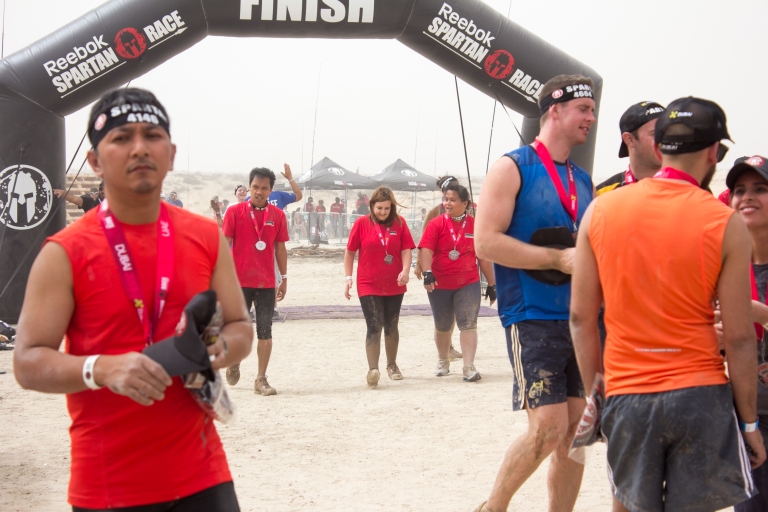 Finishers! Thanks to Patrick for taking photos at the finish line. Look at the state of my hair! 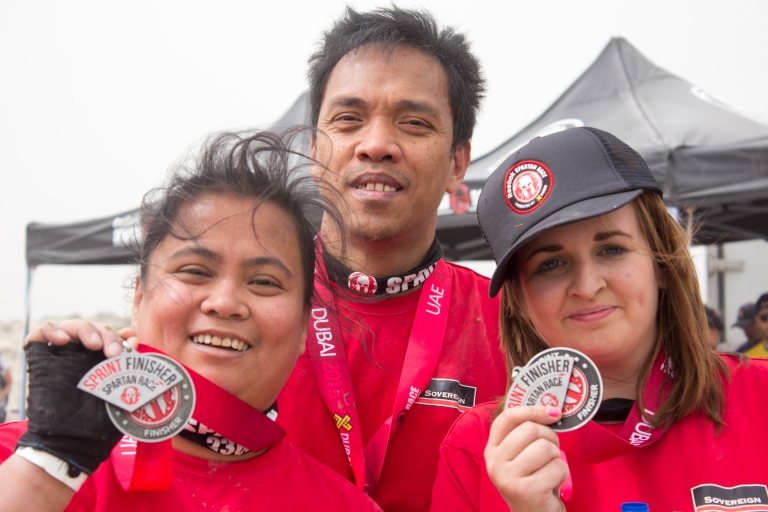 Simon, looking mighty pleased, despite apparently falling face down on one of the mud pits! You can still see bits of mud on his face! 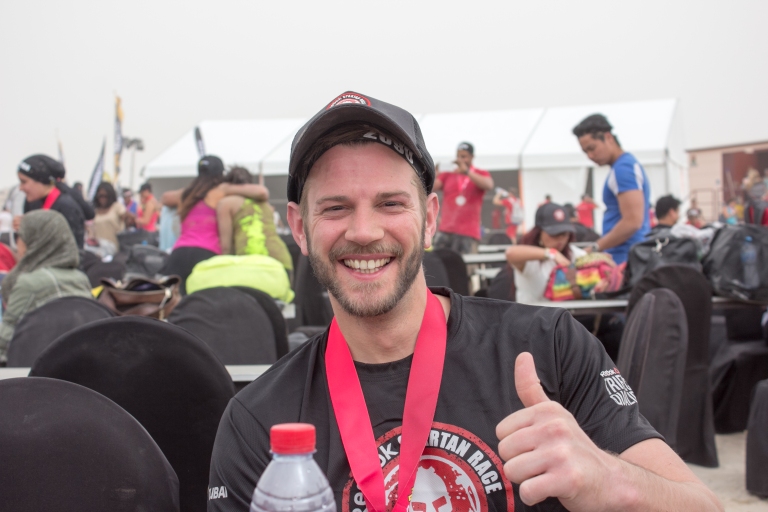 Nick had left by then and Bilal was off somewhere for mid-day prayers so this was our team. All smiles after finishing a tough race. It may not seem as tough now that we have all done it, but while we were inside the race, all I could think of was how it would be the death of me! 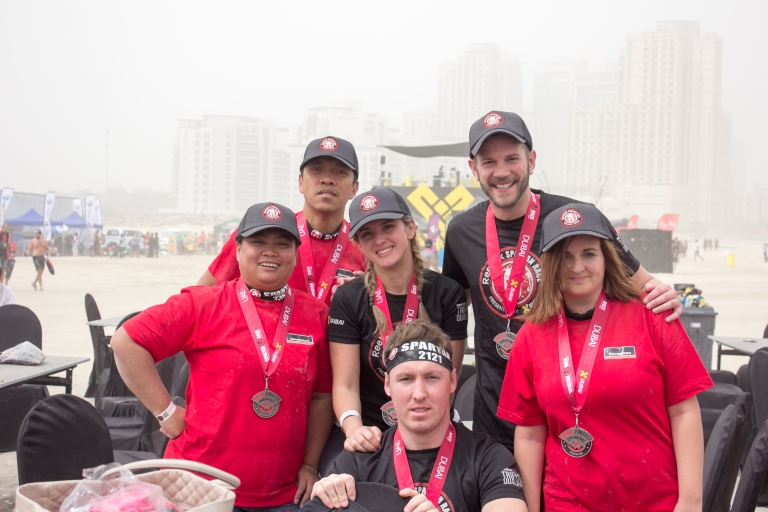 I wore my oldest pair of trainers for the race, knowing there might not be any hope of removing all that mud. So, bye bye, Adidas, you served me well. 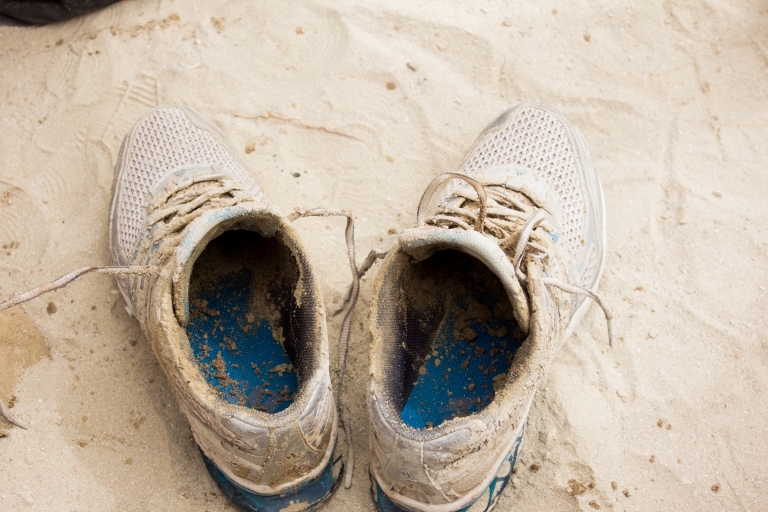 And here is the prize! What a heavy medal too! It’s quite unbelievable that I completed this race, despite skipping a couple of obstacles. Hats off to everyone who finished the first ever Spartan Race in Dubai. I hope to do it again next year! 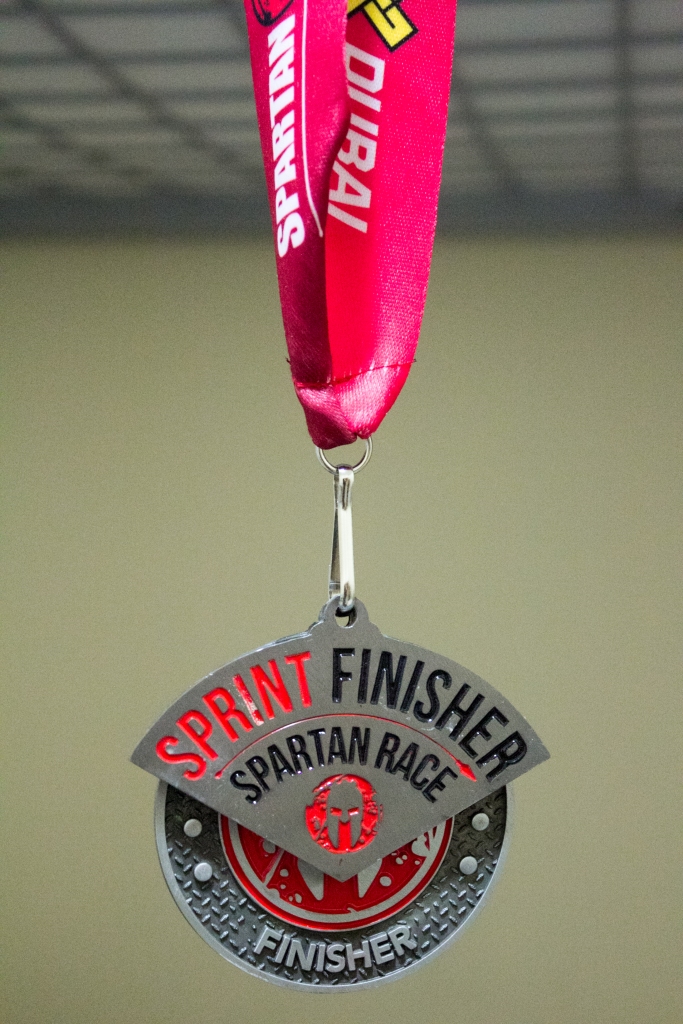 3 thoughts on “This is Sparta!”