Let’s switch things up a bit.

After 15 weeks of sharing us and the house with two foster kitties, Luca is once again an only child. He is the centre of our attention once more. Not sure if he’s happy about it or not because he was a little more quiet than usual when we got home after dropping the kitties off to their new home. Maybe he just had too much to eat and needed a lie down. Whatever it is, he is king of the manor once more!

Luca loves yarn. Not in the usual way that kitties love yarn though, he is happy to sit next to and lie on top of yarn or any of my knitting. Keeps his tummy warm. He would paw at a ball of yarn, but that’s about it. He would rather rest his chin and front paws on the yarn or the knitting and snooze away.

He may love yarn, but he loves fresh laundry even more! It’s like catnip to him. The moment my husband brings all the laundry in from the clothesline, Luca is there nestling on top of the pile, preventing my husband from folding the clothes. Yes, my husband folds our clothes. Why, does your husband not do this? 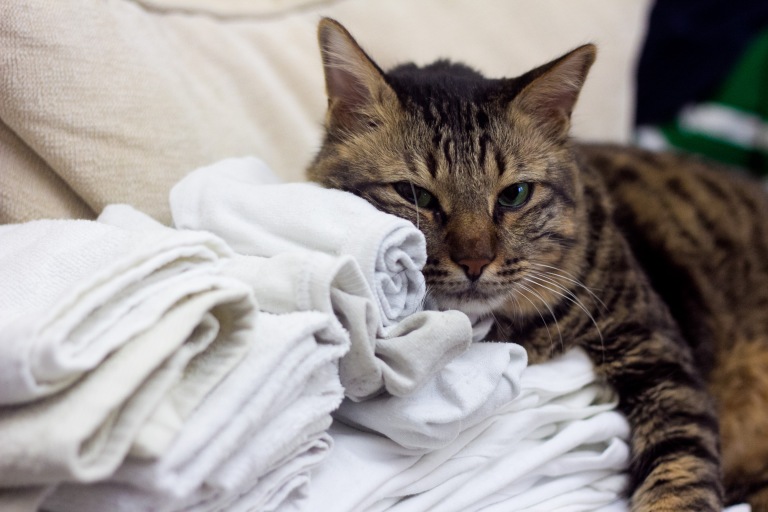 Luca loves his Papa, and playtime. I find it fascinating that Luca knows which member of the family he can roughhouse with and which one gives him food and water in the morning and therefore not the one to mess with. He does snuggle up to me at bedtime and gently wakes me up on weekends when we lie-in. By gently, I mean hop up on to my tummy and hold the pose for a few seconds longer so his claws start digging through the blanket.

When it’s Bernie playing with him, Luca goes all out. Claws and fangs come out but he never bites down. He just play fights and does a lot of zebra kicks, which sometimes can be nasty. We tricked him with the laser pointer before; he loves that. He also loves the simple things like a piece of string or my knitting needle tips. 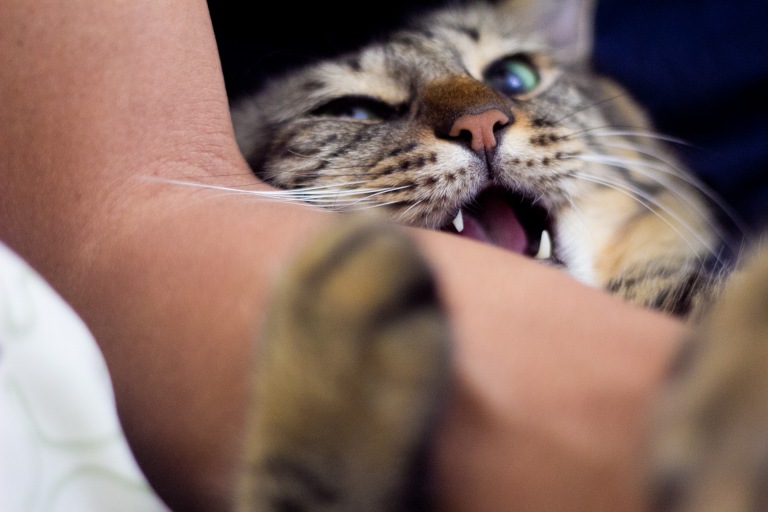 Sometimes he makes funny faces, like when he sticks his tongue out and crinkle his nose. Okay, he doesn’t really do any of those but I like to think that’s what he does. He is a Mau so he is very vocal, esp when he’s hungry or there’s no water in his bowl, or if we lie-in a little too long on weekends and he needs attention. His vocal range is quite impressive, considering he was really quiet as a mouse when he first came home with us. 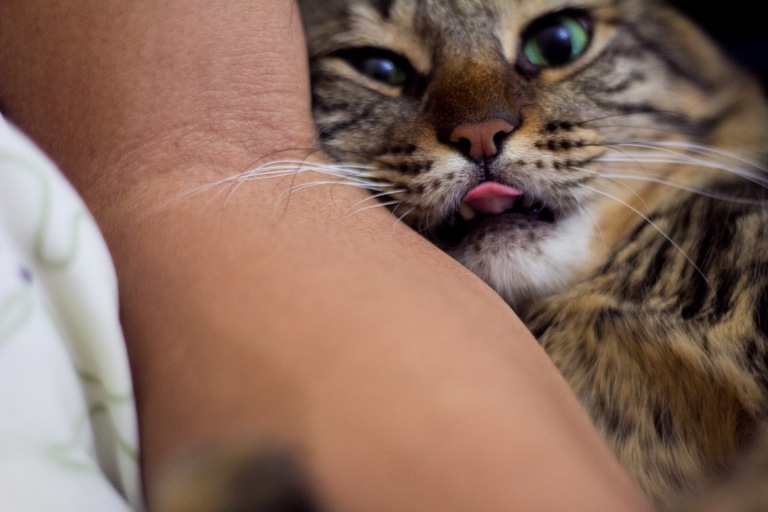 He loves playtime, which is usually at night when we’re all sitting on the couch, watching TV, folding clothes, knitting. He has a spot or two on the couch and if you put anything there he would look at you, meow and wonder why something else is on his spot. Sometimes, he would find a new spot, like the top of my legs,or Bernie’s chest, or the top of the fresh laundry.

He loves chin scratches! More than belly rubs I think. Once you get going, he really gives in to this. My arm sometimes goes to sleep scratching his chin! He doesn’t quite like scratches behind the ear, it tickles and he starts doing zebra kicks so we stick to the chin and the belly. 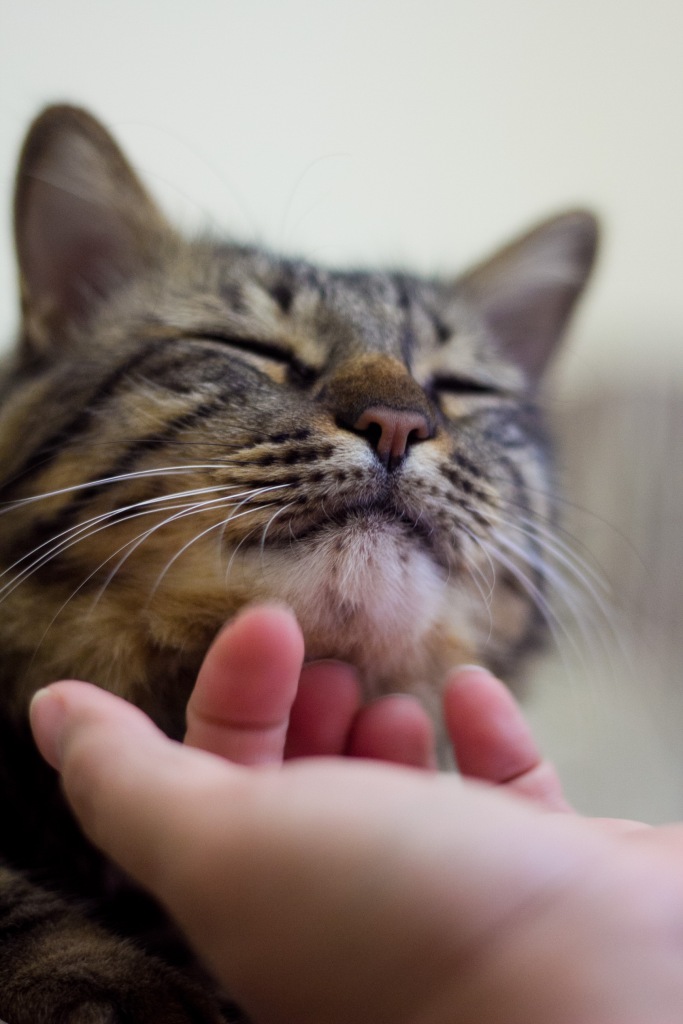 Luca is fascinating when there is an errant fly inside the house. He goes really still and only his eyes move. Then he pounces on the poor fly in mid-flight. I won’t tell you what happens when he catches one. That’s just not blog-worthy.

Luca is the lord of the manor. The king of the couch. I do wonder what he gets up to when we’re not home. I sometimes want to put a webcam on and follow his adventures. I wouldn’t be surprised if he lays on the couch all day, getting up only for food and drink and maybe a pee. He is a very good boy, and I can’t imagine our life before Luca. He is family and we love him. 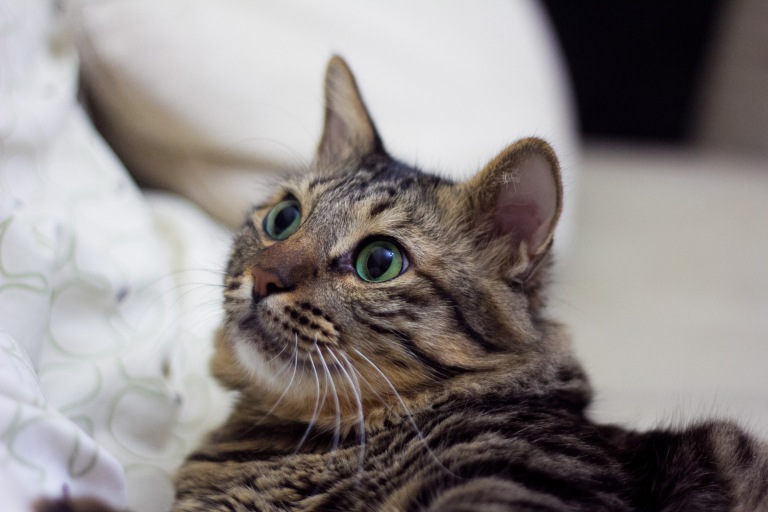