Every now and then my kids and I like to have fun with out food. Well, in this instance when I say kids I mean Patrick because this happened before Eibee and Joseph got back here. I’ve been plotting to make this for dinner ever since I pinned it to my food board on Pinterest but never found the time. Until now.

Here’s what I started with. Purefoods Jumbo Hotdogs cut into three pieces each, I used about 10 hotdogs. Carrefour Wholewheat Spaghetti pierced right through each hotdog piece. It’s a lot harder than you think, esp if the hotdog has not fully defrosted.

And then it was all dunked into a pot of boiling water. I don’t like adding salt in this process, or oil for that matter. Just water on a rolling boil. The hotdogs have this artificial red colouring which bleeds a bit into the water and the pasta, but it’s okay. The trick is to not overcook because the pasta will go very soggy. Al dente would be nice because then you can still finish cooking both pasta and hotdogs when you combine it with the sauce. 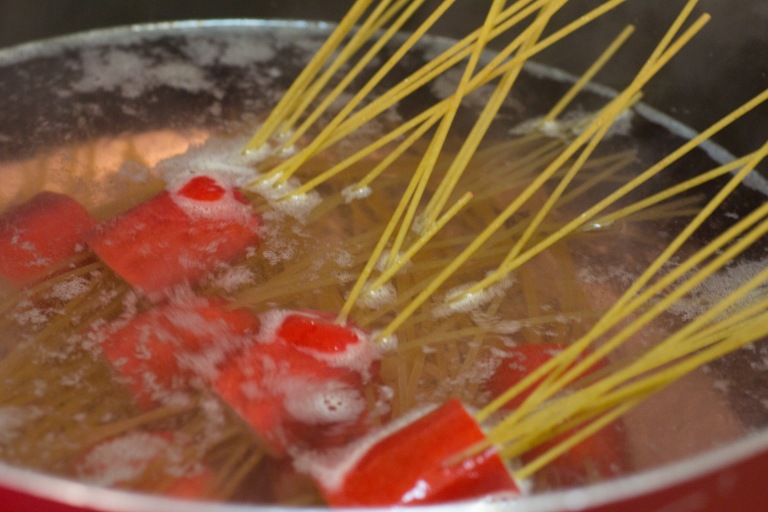 I think flat pasta would also work well with this, might be a little harder to push through the hotdog though. Ta-da! The spaghetti turned a pale shade of pink because of the red from the hotdog but it was okay because the sauce would hide that anyway. I was careful not to stir it too much in case the spaghetti breaks. 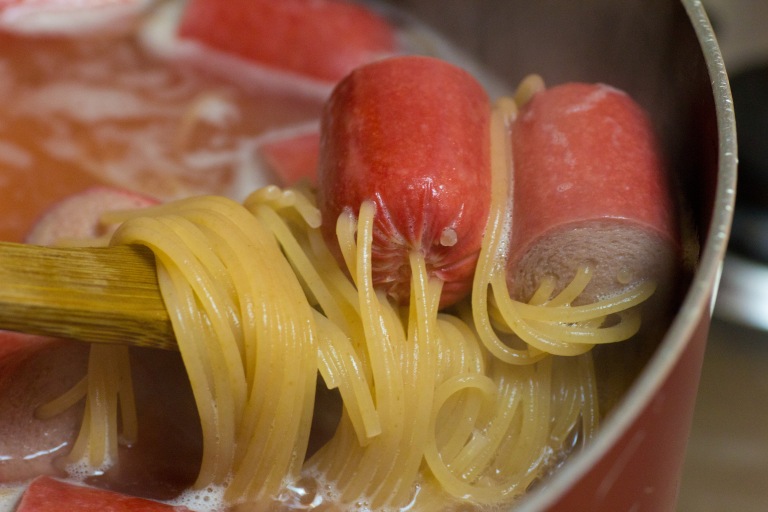 I sliced up the remaining hotdogs to add to the tomato sauce. At this point I must ask you to use your imagination because I was not able to take a photo of the finished dish. It all went down our tummies for lunch and we gave some to Ronan and Isabelle too.

Luca even came into the kitchen, his nose held up inspecting what was cooking. He doesn’t eat human food so it was safe letting him in. He usually sniffs the air and just walks away. He does like ice cream.

Oh and while I was cooking, Luca was watching these birds on the balcony, and they were very mean and naughty. They would stay on the railing and taunt Luca, I swear they were taunting him! Poor Luca was pacing back and forth and probably plotting how to catch those pesky birds. If we weren’t up on the 7th floor I would have let Luca loose on these birds. The poor guy.

One thought on “Silly Spaghetti”