For most people, March brings a new beginning. The coldness of winter gives way to refreshing spring, well at least that’s how it should be but this year spring seems to have taken a detour. March brings spring, new life, Bambi gets to eat fresh grass, the birds chirp on trees, and the world is right again. March is special for me because this is the month when my eldest child and youngest child were born. The first and the last celebrated in the same month.

The 28th of March marks a milestone for my first-born, Maria Viel Patrica. This year Viel turns twenty one. It’s one of those moments as a mother that you look forward to birthday after birthday and then, suddenly, it sneaks up on you. I cannot believe my little wisp of a baby is now a legal adult. Let me take you on a short trip that started in 1992. Note most of these photos were scans from actual prints so the quality is not in HD.

Viel was a lot smaller then and so were we, parents and godparents. I can’t believe you can actually see my clavicle! This was Viel’s christening at Our Lady of the Miraculous Medal Parish in our hometown.

Six months after Viel was born, her father travelled to the UAE to seek employment. It was a blessing but it was also a sad thing because Bernie was not around to see her blow her first birthday candle out. Or watch her take her first steps.

But soon enough, we joined him in the UAE. Mine and Viel’s first airplane ride was with Singapore Airlines. It was a 14-hour and included stopovers in Changi and Karachi. We had an hour layover in Changi and had to rush from Gate 40 to Gate 90!

This was the first time we walked through the grand mosque in Sharjah towards the Corniche. I had a cheap Fuji instamatic film camera and we set it up on a rock I think to get this shot. This was memorably tragic as well because Bernie said Choitrams (a chain of local supermarkets) is nearby so we walked. And walked, and walked. By the time we reached the store, the sun had gone down. In fairness we walked very leisurely and stopped for ice cream at the corniche. But it was still a long walk.

Before I started working, Viel and I would walk around the corniche, near our apartment building. I’d carry the camera with me and take photos of her. This was one of the first times we walked to the park and I asked her sit and pose for me. I have an A4 print of this photo. This was around March of 1994, and it was a cold day.

Bernie got his driver’s license in May 1994 and his then-boss gave him a beat up old Datsun to use. It was so old that the rearview mirrors were actually located at the front of the bonnet! The windshield wipers did not work. The AC was cranky at best, but we loved it! It got us from A to B and served us well until the evening of 9th June 1995. We all remember because that was when the car stalled in the middle of the old Zabeel Road intersection in Dubai, right by the entrance to the Shiekh’s palace, when Bernie and Viel dropped off my mother-in-law after visiting me and newly born Eivy at the hospital. 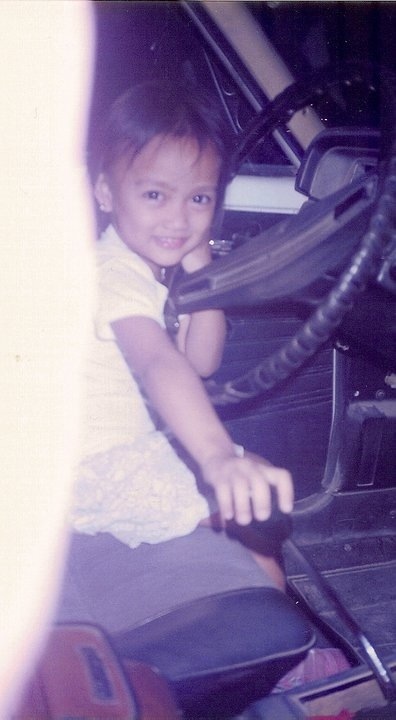 We went home to Manila a few times, but visits were few and far between. One thing that Viel loved about it was the rain. She got to play in it and use an umbrella, which we didn’t even own in the UAE! 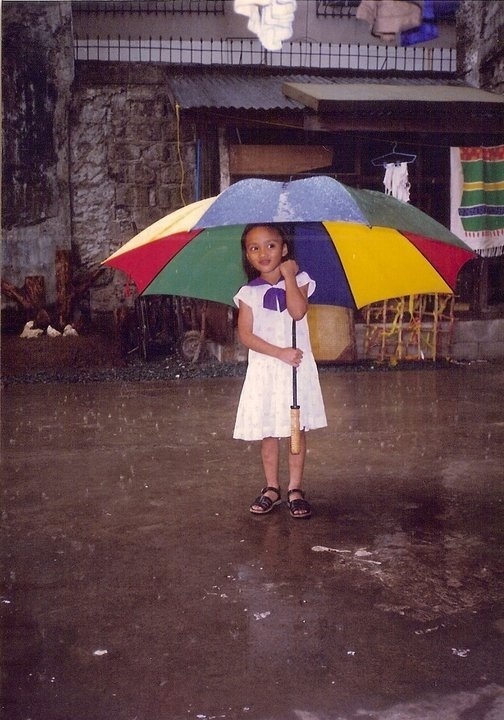 During our trip home in 1996, the entire Viernes clan decided to travel together and visit Baguio City. For most of us, it was the first time visiting the summer capital. Viel was 4 at the time and Eibee was turning 1. Even then, you could see how cheeky she was! 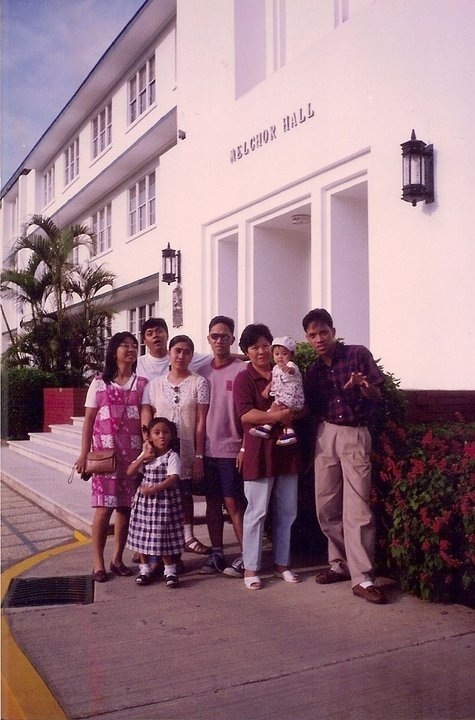 Our time in Baguio was short but we did the usual touristy stuff. We went to the Philippine Military Academy grounds, Camp John Hay.  Viel and Bernie rode the ponies. It was quite smelly there. We attended Sunday mass but it was in Ilocano (the local dialect) so I could not understand what was said.

Before heading for lunch, we decided to rent two of these paddle boats and have a turn around this pond. Epic! It was truly epic! We were just laughing the entire time and trying to row but going nowhere. You had to be there, but it was seriously piss-in-your-pants funny. 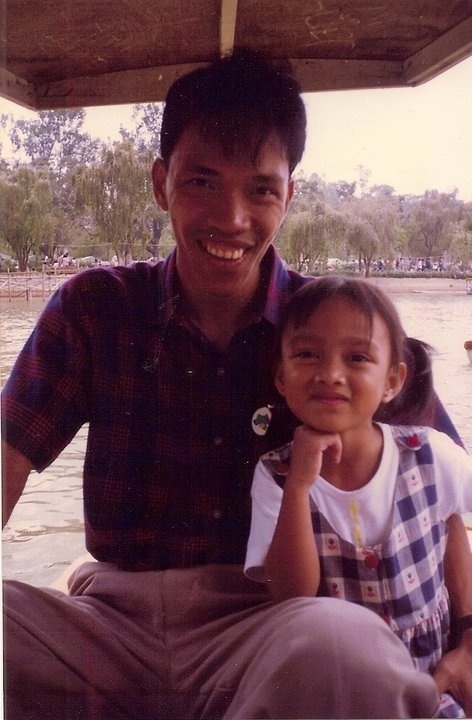 Viel was excited to be a big sister for the first time. She was really attentive and would rush to her side when Eibee cries. 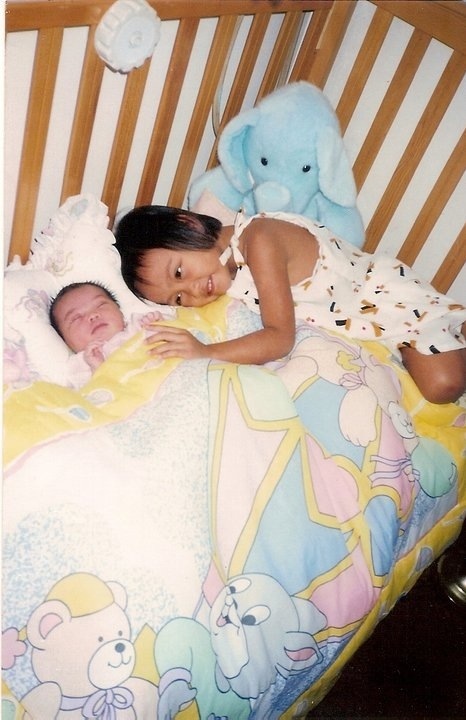 And then Joseph came along soon after and it was a full house! The date stamp on this photo was my brother’s birthday, the kids were quanratined due to chicken pox. It broke on the day of Viel’s 6th birthday but it was too late to call the party off so everyone who attended eventually had chicken pox.

And then there were four. This was on our trip home by way of Hong Kong before Viel started college. They all look like babies back then.

Viel received her first communion in St. Michael’s Church in Sharjah along with most of her childhood friends. I suppose that makes it special. They all experienced a lot of milestones together. Father Angelo was the parish priest at the time, he was the one who christened Eibee, Joseph and Patrick.

This was in the first grade at NFPS. Eibee would have started kindergarten that same year. See how skinny she was? Always so skinny, even as a baby.

Ocean Park, HK. It was a good, very long day! The second day of our stay in HK. It had been raining a bit so some of the rides were shut down, but we had a great time. Viel looks really dark here as she had just finished playing volleyball for the school team. She was out in the sun a lot that final year in high school. 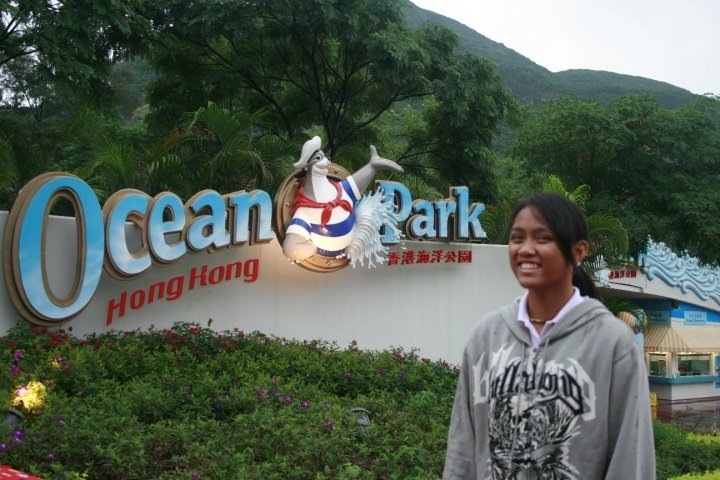 My babies! First and last, who look nothing like me. They take after their father. All of them. I was just the delivery method.

Family portrait at last! This was at Dar Al Masyaf in Dubai when we stayed for a weekend. It was good, we had brunch, the girls had treatments at Talise Spa, we swam under the lights of the Burj Al Arab at night and generally chilled out.

Silly girls! Viel had never really grown her hair out so this was a rare occasion. But it was chopped soon after this. Summer in Manila plus long hair equals doom!

The three-headed Viernes! Me and my girls on a dhow cruising the Dubai Creek at a neighbour’s baby’s birthday party.

She does love the camera. And the camera loves her back. Even when she was a little girl, she loved being photographed.

And this is how I will leave it, Viel, my daughter smiling, laughing, enjoying life. I wish you the best of everything. You will always be my first. Like I said, everything I know as a mother I learned with you, through you and from you. I love you. Always. Happy birthday.

2 thoughts on “Twenty One”