This post seems to be one of my most popular ones because it gets a lot of hits from people Googling for Rose’s wristwarmers which I originally knitted in 2008 when I was just learning the craft. So I polished it off, added photos and ran a spell-check.

This project was ripped three times before I took a deep breath, cleared my thoughts and mustered all the Zen I could to devote time to it. It’s not that the project is a complicated one, far from it, but because the stitches have to be precise it required focus. For an experienced knitter this is a piece of cake, but I still consider myself new to this. In fact, any pattern which consist of more than stockinette or garter stitch and the odd yarn-over and slip-slip-knit is all new to me.

So then, 3 trips to the frog pond and 2 months later, I bring you my first pair of Rose’s Wrist Warmers (this links to my Ravelry project page). These gloves were inspired by those worn by Rose Tyler in the Doctor Who Season 2 finale entitled Doomsday. Here are two screencaps thanks to this site.

Here are my gloves just after I finished the bind off. It turns out the particular Peru Alpaca DK called for in the pattern has been discontinued so the yarn I bought is slightly different. It is splitty and hairy and bunches up like that. 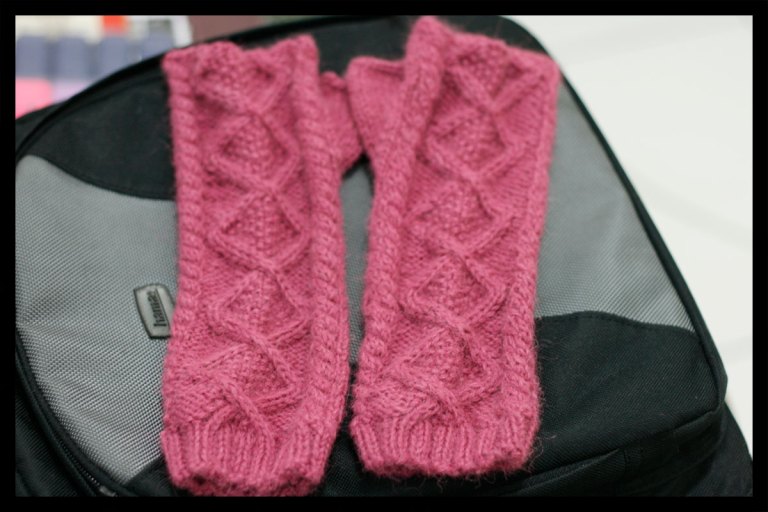 My daughter kindly offered to model them for me. As you can see, they stretch out pretty nicely and the diamond motifs and cable twists are clearly visible.

Another angle showing both gloves. She thought she was allowed to keep them for herself!

Things I learned with this project:

This first pair which is intended for Sarah has been soaked in the free wool wash I got from The Loopy Ewe, the colour ran a bit in the water but not too much so as to alarm me.  I had yarn leftover so I decided to knit up a mini sweater for one of her Stargate action figures.  We’re both huge Stargate fans. 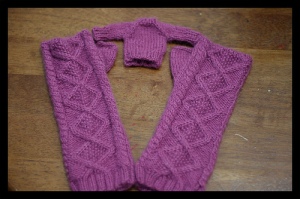 I originally made the mini sweater for Action!Joe (as in Joe Flanigan who played Col. John Sheppard in Stargate Atlantis) but apparently it was too small so Action!Ben (as in Ben Browder who played Col. Cam Mitchell in Stargate SG1) got the sweater instead.  You gotta love a military guy who wears pink!

And finally here is a photo of the wristwarmers on Sarah. I think they look alright. Now if only I can get back to the pair I meant to be making for Alex too!

One thought on “Step Aside, Miss Tyler”