Most knitters I know have other craft hobbies to keep them busy when they’re not knitting. There are quilters, spinners and dyers. And we recently discovered in our local group that most of us have dabbled in cross-stitching in the past.

One craft hobby which I have always been fascinated with is weaving. It’s ancient but produces something that is highly useable. The big looms are scary though so I have been looking at small tabletop looms. It’s on and off. I’d look at a manufacturer’s website when I see a woven project on Ravelry and then move on. But when I read that Schacht had come up with a new 15″ Cricket Loom, I paid closer attention.

I must have read the manual at least 3 times and read up on techniques and tips on the Ravelry group called The Cricket Club. Plus there’s plenty of videos on YouTube and loom manufacturer’s websites so it wasn’t that difficult. Plus I made friends with an extraordinary weaver/dyer/spinner/knitter who has given me a lot of valuable tips. You can check out Missy’s handwoven beauties in her Etsy shop, Wool Therapy.

Here is a collage of my loom when it came out of the box and the first ever project I started using the yarn that came with the loom. It was a practice project which even my 9-year old son found interesting. He basically did half of that first project. 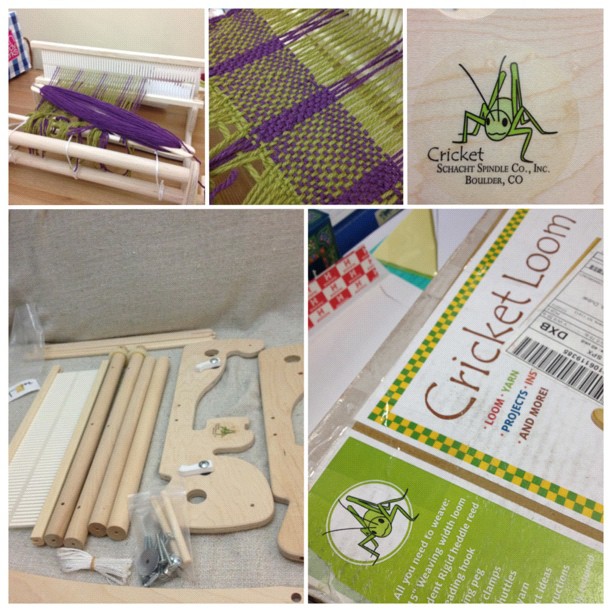 One thing I learned about that practice scarf was warping properly. Well, I learned it AFTER I had been working on the scarf for a couple of days. I was wondering why one of my yarns had run out when in fact I misread the warp instructions. That’s one of the difficulties of not having a proper local weaving guild or club or something where I can learn from experts and get proper lessons.

Anyway, from conversations with Missy, I learned that I need to have at least a 10-dent reed, which is what works best for fingering weight yarn which I have heaps of. I should have ordered one of them at the same time as I ordered the loom, but oh well. As soon as I received the new reed, I warped it right away. There’s this skein of Socks That Rock lightweight that I have been trying to find the right project for. I tried two different patterns of knitted socks but the striping/pooling did not please me so I thought about a woven scarf.

Warping I think is what takes more time in weaving. Esp if you want colour repeats to line up a certain way when using handpainted yarn. I am happy to say that I managed to get the warp to work out the way I wanted it to. 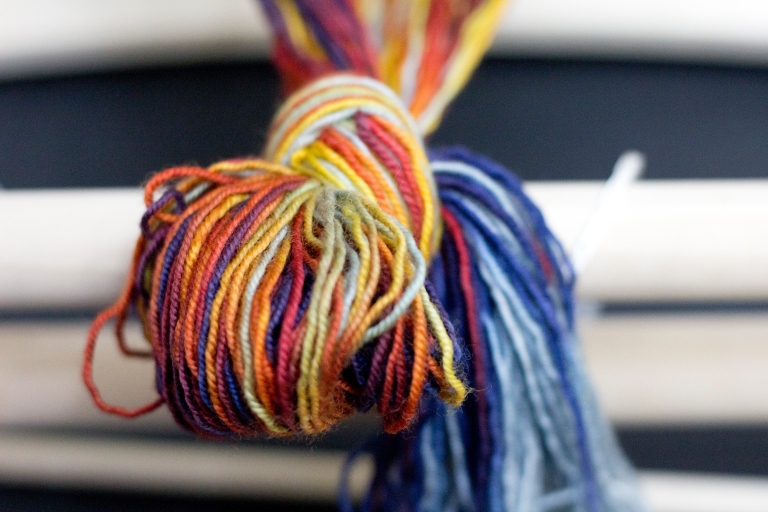 So, here it is, my first proper woven scarf using two skeins of STR. The weft is Firecracker from the 2010 Sock Club. I love how the weft has this more or less constant repeat of light purple making a sort of stripe effect on the fabric. 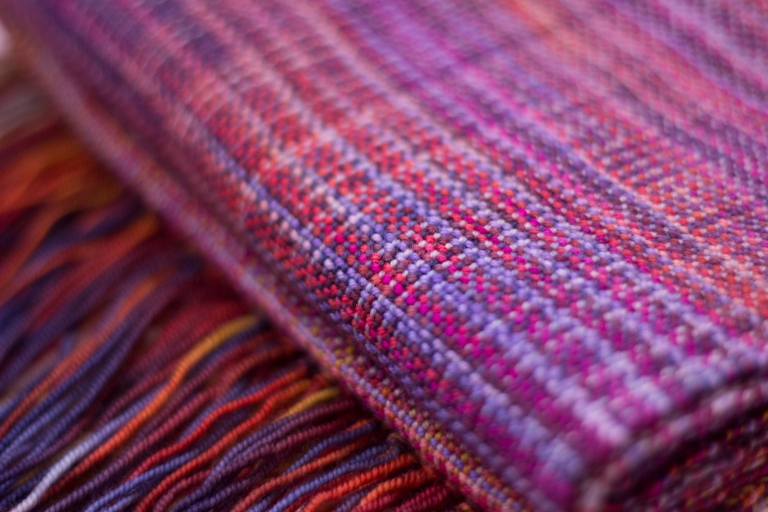 It’s an absolutely enjoyable project. And I was surprised at how quickly it took me to finish it. This project is part of my Ravellenic Games 2012 challenge for Team Blue Moon. Oh and the best thing about this? Two full skeins of sock yarn stashed down, just like that!

I’ve been hemming the start of my scarf before I went to far into the warp because I am not sure how to hem once it’s off the loom. Most tutorials and tips will show you how to hem at the end of your weaving, but never at the beginning.

Here’s a photo of the scarf unfolded so you can see how the colour variegation affects the finished product. I love it! Don’t know if I can part with it really, but might give it as a holiday gift to a friend depending on how nice or naughty they have been this year.