Last weekend, we travelled down to The Vet Hospital in Al Quoz as they were hosting an adoption/fostering programme for Feline Friends. Bernie found the advert on 7 Days and thought we’d take a look; not intending to adopt any cats at all. I wasn’t sure if the kids were ready for this kind of responsibility.

It was a swift process; they take your details, ask you some questions to see if you are suitable to adopt or foster a cat. Then they show you to where the cats were kept in their own carrying cases. It was so difficult because each cat we saw was more adorable than the one before! But I knew in my mind that I wanted an older cat, not a kitten definitely because I don’t want to be the one saddled with house-training them.

We were considering one of two brothers, either Bert or Ernie, yeah no kidding! Bert was ginger and Ernie was ginger and white. They were 1-year old and right away I knew they were not for us. Bert was so curious and would not sit or lay still. Ernie refused to get out of the box. So that was that.

We asked to see another cat, an older tabby and we all fell in love with him. Not Bernie right away because he wanted a cat with a tail, and this cat’s tail was cut short, don’t know why. Meet Luca!

In the consultation room at the clinic, he let us rub his tummy and his ears and he let us carry him. He did not hiss or clawed at us. He was very gentle. This photo was taken the morning after we took him home with us. It was the first time he ventured out of his hiding place under our bed and explored the apartment.

This is his most favourite thing in the world: tummy rubs. No matter what he is doing, the moment you put your hand on his tummy he would lie down and stretch out and just purr as you rub his tummy.

See what I mean? He loves it! He has taken to sitting down on the runner rug and I am now being pressured to knit him a kitty basket so that he has a permanent bed.

We haven’t got a brush for him yet so we salvaged this one from somewhere and started combing him last night. He loves it!

Then of course he thinks it’s play time so he starts clawing at the brush! Patrick has been playing with him a lot using a jump rope which he dangles in front of Luca. He does not care much for the small leftover ball of yarn we started rolling around in front of him – which is a relief to me! My yarn stash is safe – phew! 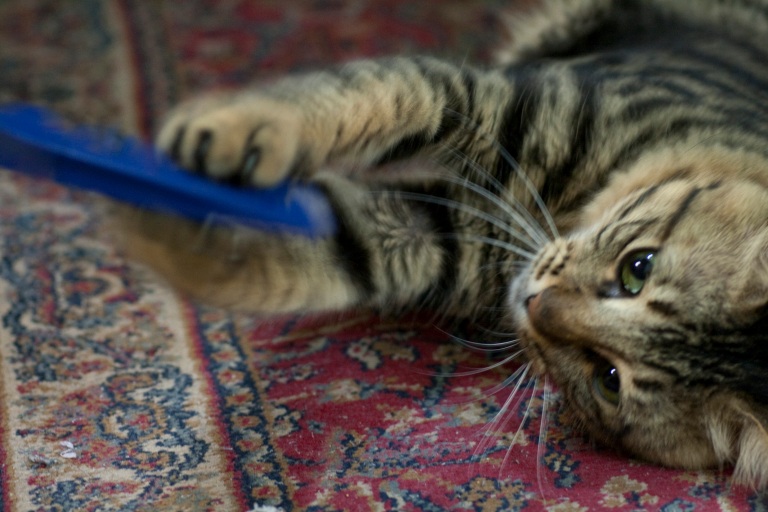 He is quite curious of course and any noise would make his ears perk up and he would stay very still for a few seconds. And then it’s back to playing. 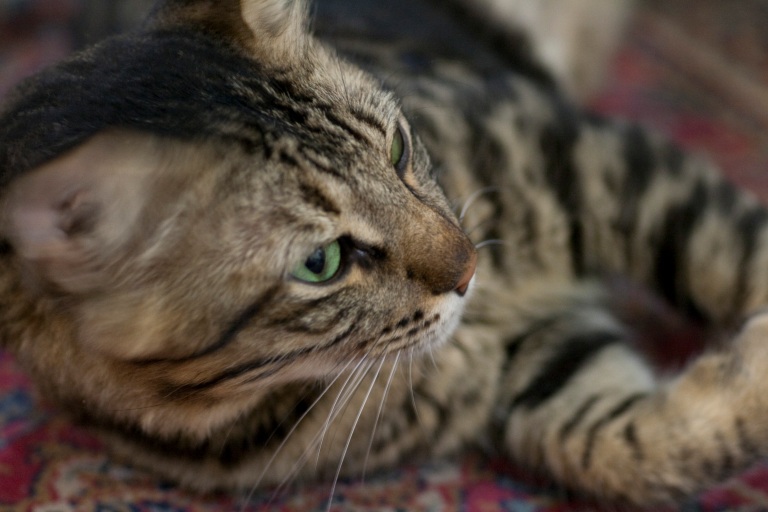 I suspect there will be more Luca photos to come in the future. Just watch this space.

3 thoughts on “His name is Luca”