Joseph finally had his hair cut! Yes! Mama: 1, Joseph: 0. It’s still long if you ask me but better than what it was. You won’t believe how much time he spent in front of the mirror last Friday trying to figure out how to style his new mop. Like a girl! 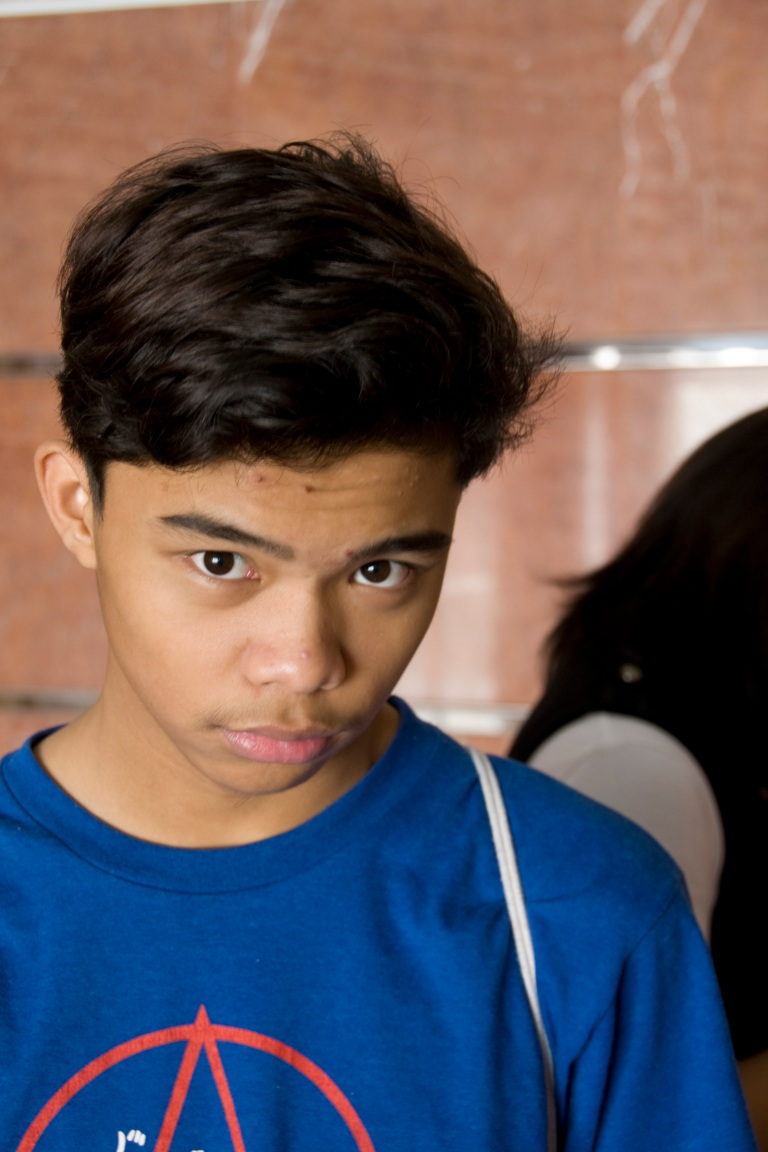 We did get him sorted and attended mass at St. Mary’s in Dubai. It was a good service. They give special blessing to birthday celebrants for the month and Joseph was one of them, even if we had to force him to go up towards the front to receive blessing from the parish priest.

After that we went on the metro towards Jumeirah. Since it is Ramadan there are very few places were you can dine in and the Madinat Jumeirah is one of them.

Waiting for the Metro. We actually forgot our permanent NOL cards so had to buy these one-trip cards both ways.

The kids love standing inside the train and fighting inertia. Joseph was doing an impression of MJ in Moonwalker. Pretty good one too. The ride was alright, not very crowded considering it was a Friday.

Patrick let out a gasp when he saw the escalator and how steep it was. I’m pretty sure he’d been here before, but it was a while since our last metro trip so I can’t blame him.  Can you imagine howmuch your legs would hurt if the escalators stop working and you had to climb up these stairs?  In heels?

The Noodle House was open and bustling with non-Muslim patrons. We had an awesome meal, topped with freshly brewed cappuccinos from the newly fixed cappuccino machine.  Photography opportunities were scarce though since it was too hot outside.

We decided to go and watch a movie. The only one that caught our eye was Inception. We have been thinking about seeing it but wasn’t really sure if Patrick would like the film, let alone stay awake through it. It was PG15 anyway so we managed to get him through. And Oh-Em-Gee! It was freaking good! So good that now I want my own totem. 🙂

It was post-Iftar when we got out of the cinema which meant it was safe to eat in public. We had a quick bite at the food court, thanks to our very hearty lunch at The Noodle House. Burgers all around for the family and fish and chips for me.

Patrick so kindly took a photo of me so I returned the favour. I love this 18-250mm lens from Sigma! It’s big-ass heavy but it covers almost all the angles you could want on a day out with the family so it’s great.

And finally, something knitting related. You didn’t think I’d post without mentioning anything about my knitting, did you? The second sock of my Charybdis socks is well under way. I had completely forgotten about this and picked it up when I decided the hoodie, which has grown so much in size and weight, is now too big and heavy to carry around. The sock is working out alright so I hope to finish it soon. And then bloody start on the Brambleberries already!