I have no shame in saying this: we’re addicted to spas!

We could live in a spa. Heck, I want to live in a spa! Imagine all the massages and the facials and the beautiful smells 24/7? Heaven.

Not long ago, which is to say I can’t remember now since I delayed posting about it again, Eibee and I went to Raffles Amrita Spa for facials and massages. Amrita is an oasis in the middle of a concrete desert. If it wasn’t so hot outside we probably would have swam in the 4th level pool too! We said we’d stick to the jacuzzi instead but, was it our bad luck or what, the jacuzzi was out of order. So it was straight off to the separate treatment rooms.

Eibee had a facial and a regular massage while I chose to be more adventurous and tried the hot stone massage. My therapist, whose name escapes me now, showed me the large steamer/boiler thing with the smooth black stones she was going to use. They were set at least 125 degrees Celsius! What did I get myself into?

Anyway, she started with placing heated stones between a layer of towel on the massage table and she asked me to lie down on them. The stones were lined up along my spine and lower back – and man were they hot! But I have a high pain threshold so I was able to enjoy it. Then on top of my body, she placed another 4 or 5 stones, as well as one baseball-sized stone each in my hands.

Then she went on to do the proper massage. She applied oil on my skin first then used a hot stone fresh out of the boiler to massage my legs and feet and arms and body. The first contact of the hot stone on bare skin was startling but after a while it felt good. She applied medium pressure so that was great. My favourite part was when she placed smaller stones in between my toes and left it there. You could feel the heat travelling down to your soles.

When all that was done the facial began. It was just like any facial but it felt good since I haven’t had one in ages. What I loved about it was the fragrant oils and creams she used, expensive ones though so I didn’t buy any.

After more than hour of pampering, Eibee was positively glowing!

We met up with the boys and headed to Dubai Festival City for some lunch and grocery shopping. 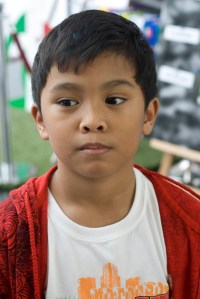 Yep, still with the after-spa glow. One of these days I will get the boys to spend a day at the spa so they can see what we’re so crazy about.

Joseph definitely needs a good deep scrub facial. He has healthy skin but has lots of blackheads, typical teenager I suppose.

Oh no! It’s the three-headed monster!

I didn’t know he stuck out his lower lip like that until after we got home and I downloaded the photos.

This is a cute little wooden butterfly keychain given by Jezzel after her trip to Baguio City in the Philippines. Most of the girls at work got one and it had our name painted on it.

After lunch, we went and saw Karate Kid 3. Okay, guilty pleasure for me since I said I wouldn’t pay to see it, but it was surprisingly enjoyable. Although why they didn’t call it Kung Fu Kid instead is beyond me.

We decided to use our Entertainer vouchers to play two games of bowling. I could have done better but I swear the damned lane swerves to the left because no matter how I adjust my swing the ball kept going to the left. Cheats!

I signed up for a WordPress blog today. WordPress users out there who read my blog, yay or nay?