Skip to content
On the 30th January 2010, the UAE Knitters turned one year old. And we all forgot about it!

The Lime Tree. Prior to that meeting, I had only met with Lindsay, Charmaine, Hala and Analisa once. It was at Madinat Jumeirah, at The Dome. The AUH knitters had known each other a few months but only met me and Analisa then. It was a bit weird testing the waters with everyone, but I think we went away knowing we have made new friends.

At the meeting a year ago, I first met Jackie, Debbie, Kundi, Rama, Yanti among others. Now sadly, our number while it has increased has also diminished. Lindsay is heading back to New York. Charmaine is off with her husband and cute wee Felix to the land down under. Yanti is freezing in Holland. Preeti is cheering on the Winter Olympic torch relay in Vancouver. Madli is going to London in about a year’s time. Despite all of this, we remain united, albeit online and from time to time at Caribou Cafe!

When we meet, no matter how long ago our last meeting was, we have fun. We talk about what we’re currently knitting. We bring out our recent yarn purchases and discuss techniques and patterns. Oh and we love love to wind yarn! Here is a skein of some really huge skeins of yarn from Hala. 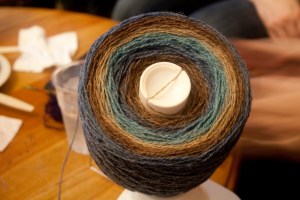 Debbie brought some of her beautiful handspun. Just look at these beauties! 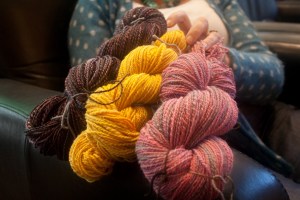 In addition to all that personal yarn, we also have the Roaming Bag which is bursting at the seams with all the leftover yarns it contains. We met a couple of new knitters this last meeting and they happily helped themselves into the bag. Better than having it go to waste. Kundi is taking the bag to Africa when she travels later this month I think to give to the women in Tanzania or Kenya I think.

Speaking of projects, Ruth showed us this gorgeous cable gloves. I think it’s a pattern called Knotty. The cables are just pretty.

Jackie modeled this cowl made by Shyma. It’s cozy and warm, perfect for cold evenings. It was a great meeting, ladies. I can’t wait for the next one! 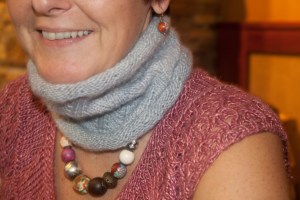 Another thing which has turned a year old is my membership to the Rockin’ Sock Club! The first kit has arrived and it looks awesome. 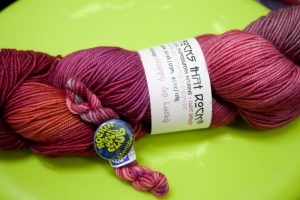 This year’s club is different in that it contains on skein of yarn but two different patterns. Your choice as to which pattern to knit with the club yarn. I have decided to knit the kit this year as and when it comes. I chose Christina Bain’s Flabella with it’s bobbles and fan pattern and elegant ribs. Thi sis my progress after one day. I already cast on for the second sock and worked on them until both socks were at the same point, and I am now knitting the heel flap for one sock. It’s great fun so far!

More on yarn clubs, I received my first shipment of the Skein Queen clubs which include her 2010 calendar. Beautiful yarn, beautifully photographed!

And the yarn is gorgeous as always. This is Benjamin Bunny from the Film Club inspired by the film Miss Potter. Gorgeous, delicate blues. I imagine something for Patrick, maybe not socks but something cute.

This time I signed up for the Reading Room too, but for the larger shipment of 4 skeins Plushness for two shipments and 4 skeins of Blush for one shipment. This shipment has 4 gorgeous purple skeins of Plushness, enough for a garment, which is inspired by the film Twilight. The colourway is called Bella. How gorgeous is this, huh? 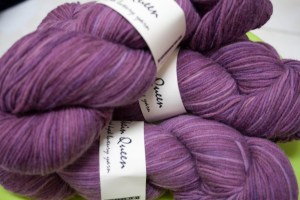 I am itching to knit with this yarn. This is one of the bases that I have only seen but never actually bought for myself. And now I have enough yarn to make a vest or a cardigan.