Skip to content
Have you noticed how I always put up photos and talk about recent yarn purchases? I like to show them off, the colours are just too lovely to hide them away. A week or so ago I decided to clean up in the bedroom and basically shake things up.

I wanted to move our bed 90 degrees to the left to give us more room. Bernie agreed so we did that. We also cleared out a lot of clutter like old clothes, paper and plastic bags which we will never use ever, moved the TV, tidied up all the cables for the PC and the TV but most important of all, I freed up the 4-tier plastic drawer of all the yarns in them and moved them into a second IKEA castor bin.

Here’s what most of my stash looks like now:

I say most of because that’s not all of it. There’s still a few ziplock bags in the farthest reaches of the wardrobe. I freed up enough space in anticipation of all the clubs and further yarns I have purchased so far. This is not the end of stash organization though, because I plan to tidy them up some more and actually leave notes as to which stash is for which project. Kinda like my own actual Ravelry stash and queue!

One thing I finally realized and had to accept in light of what I was staring at: I have way too much yarn! There I said it.

Speaking of clubs, here’s the next shipment of The Magnolia Society Sweater Club. It’s Tosh DK (formerly Worsted) in the beautiful Wisteria colourway. I got this changed actually as my original choice was something else. I have no project in mind yet but I’m considering a Buttony Sweater.

A new club I signed up in is Lotus Yarns Pin-Up Club. This is the first shipment and it is a beautiful blue skein of merino/cashmere/nylon base. The colourway is called Jenna, as in Jameson. Yes, not your regular variety pin-up but still a pin-up. What do you think, socks or shawl? 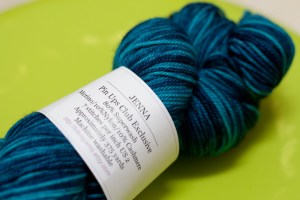 Shawl is my big thing this year. I just finished my first one. It’s the wonderful Swallowtail Shawl

which is a free pattern by Evelyn A. Clark.

I loved knitting this shawl and, I know I say this about every project I make but I mean it this time, I will knit this again. Mainly because I want to knit it in pure wool to see the difference in blocking and also to make a slightly bigger one. I saw one project which had 19 repeats of the budding lace pattern and used only one skein of DiC Smooshy. I’m tempted to use one of my Wollemiese skeins here.

The nupps were not as difficult as others made them out to be. The first row of nupps were purled together as per the pattern but purling 5 stitches together could be a bitch esp when you’re in a moving vehicle so I did what Mintyfresh did for her nupps which is to *slip 2, purl 3tog, psso*. I did love knitting nupps!

Project: Third Time Lucky (so names because this is the third project I started with this yarn)
Pattern: Swallowtail Shawl by Evelyn A. Clark
Yarn: Handmaiden Fine Yarn Sea Silk
Colourway: Lily Pond
Needles: 4mm
Cast on: 12 Jan 2010
Cast off #1: 31 Jan 2010 but then frogged it because it was too tight and I couldn’t pull out the points during blocking.
Cast off #2: 1 Feb 2010
Notes: As stated above