When you have two full moons in one calendar month, this event is referred to as blue moon. Wikipedia says there will be two more blue moons between now and 2015.

Blue Moon is also one of my favourite purveyors of hand-dyed yarns, and Tina Newton is the brain behind it all. I think she sees colour in everything in her life and she can mix and match them on wool even with her eyes closed and still come up with very vivid, beautiful and yummy colourways.

This year marks the first time that I joined her Rockin’ Sock Club. The theme for 2009 was Notorious Sock Knitters World Domination Tour. It is humbling to be in the same company as some of the most talented sock knitters I have only read about in Ravelry and knitting blogs, esp when I have not even knitted any of the kits which came along this year. I have always thought that it was the first pattern which intimidated me. Queen of Beads, designed by Sivia Harding includes, well, beads. With only 2 pairs of socks under my belt at the time, tackling beads was way over my head.

As if I wasn’t intimidated enough, the next pattern was designed by no other than the Yarn Harlot herself, Stephanie Pearl-McPhee. It was a very dainty pattern and seemed really easy but I didn’t feel right jumping on the second kit without even giving the first one a second glance. So I put that kit aside too.

After that it was blue from one kit to the next and I just kept stashing them away after reading the Dyer’s Notes, patterns and much petting of the yarn of course. We had patterns designed by Melissa Morgan-Oakes, J C Briar and Cat Bordhi along with some really fresh colourways.

Only last week I wound the September yarn and found 3 knots in different places. I’m not sure if I should rattle Tina’s or JoAnn’s cages about it but I suppose I should so they can give the mill another ear-full.

Anyway, last Tuesday, I received the last kit of the year. 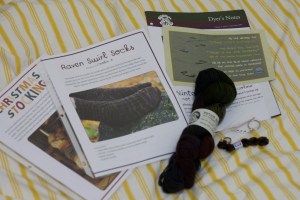 I knew it was going to be a Cookie A pattern since hers had not come in previous shipments. I admit I haven’t read it yet but it looks interesting. There is also a second pattern designed by Anna Zilboorg, which means of course that it is colourwork. It’s a Christmas stocking pattern which lets you go wild with the colours. It has the makings of an heirloom piece.

The colourway is a possible addition to the current Raven series, it’s deep and rich with hints of green and deep red.

Club swag includes 5elementknitr’s Stitch Saver. It’s a lightweight mini crochet hook with a keychain so you can carry it with you everywhere you go. It’s great for when you dropped a stitch miles away from your crochet hooks at home. I’ve been eyeing this little tool for a while so when I found a customized NSK stitch saver in my RSC kit, I was grinning like stupid. This alone has a retail value of US$8.50 – Tina is so good to us! Thanks.

There was a discussion started by Tina about the emergency skeins and about whether members mind if they were no longer a part of the club next year. Frankly I am not bothered. They’re nice to look at, makes for great keychains but it wouldn’t be the end of the knitting world if we stopped getting them. Apparently they cost a bit too so it would be great if the money that goes towards the emergency skeins were used towards other club swag.

Here are what could possibly be the last of the emergency skeins, from left to right: My Blue Heaven (Jan), Gertrude Skein (Mar), Pepe Le Plume (May), In Season (July), River Rocked (Sept) and Blackbird (Nov).

Sign-ups for Rockin’ Sock Club 2010 starts in the second week of December. I think I will do the same thing I did this year and sign up after the new year. The servers get flooded with so many people wanting to sign up, but there is always enough places, besides I will need all the money for the holidays.

Guess what sock patterns I will be queueing up come 2010.