Skip to content
Time to let the fangirl out. She’d been in hiding for far too long.

Those who are caught up knows what happened at the end of Season 4, but if you don’t ,then close your eyes right now and scroll your mouse down to the pretty pictures below.

So yes, Sam jump-started the Apocalypse, thanks to the evil, double-crossing She!Demon that is Ruby. And the truly criminal thing about it is that it was not even the blonde, cool Ruby but Ruby with the lisp. Ick!

Alas! That was not the end of the multi-layer cake surprise that is Evil. Thinking back to a couple of seasons ago, we now realise that it was inevitable that Sam would die in the weird-o Battle of the Child Freaks staged by the YED. Sam was meant to die. Dean was meant to trade his soul with the crossroad demon to bring Sam back. Dean was meant to die and go to hell. And poor Castiel was meant to yank Dean’s cute ass from that horrible place only to break the first of the 66 seals to free Lucifer. Sam was meant to hurt really badly after Dean died making him go crazy with Ruby and get high on demon blood which led him to that chapel where he iced Lilith thus start the ball rolling on the Apocalypse.

So that’s it so far in a nutshell. Well, of course there was all that Papa John and Mama Mary backstory, which was one of the best moments of the show, ever, plus all the vampires and the Colt and the girls and the Ghostfacers, oh and the Trickster who I heard will be back to his old tricks soon. 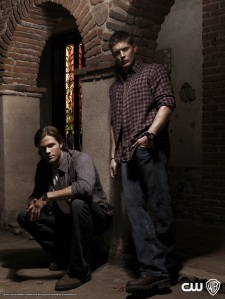 The whole mythology of the show has taken a rather dangerous turn but I love how Eric Kripke gives this spin a truly original touch. The writing is superb. I have come to trust every Sera Gamble episode. Or Ben Edlund ones. But the ones where Kripke dips his digits into are always the best. Only the most cynical viewer would complain about politically incorrect issues. in the show Hardcore SPN fans would just kick back, or sit on the edge of the sofa in some cases, and enjoy the show. Of course we watch the episode at least 2 more times to nitpick on every dialogue, every decision the brothers make, every conversation to make sure nothing Dean says escape our ears (we don’t want to lose count on how many times he has said ‘bitch’ so far!) as well as every new idea introduced to us.

I just re-watch it for the heck of it. No, really! Okay, Lee stop laughing and don’t roll your eyes at me like that. 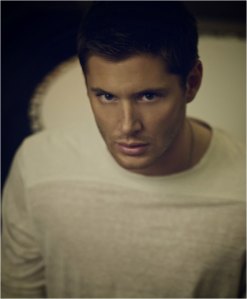 Okay so this season so far is a bit slow on it’s gradual climb to its endgame which the fandom has always believed to be the showdown between the last two remaining Winchester boys. And we have had confirmation, sort of, since it was revealed in Free to be You and Me that Sam is Lucifer’s Chosen One. His meat suit. His vessel. And Dean is The Vessel for Michael the Archangel. Only the most stubborn ones would ask for it to be spelled out in big bold red letters but these facts have only one conclusion: the brothers will have at it at some point before the season (and show?) finale.

A few things of note in the road so far:

And yes I have to say something about the Paris Hilton thing. I was skeptical, avoided all the spoilery blogs just to keep it fresh and let me tell you that episode turned out beautifully. Paris actually rocked her scenes!

It was funny about Dean not seeing The House of Wax and Sam looking at him sideways which was of course an allusion to the fact that Jared was in that film with Paris. Gandhi icked me out a bit. And of course it was great to see Carson Beckett Paul McGillion again and using his natural accent for a change, although the Scottish one is always my favourite.

The absolute best bit about episode 5: SOON! I just spoiled myself with some previews of the rest of the episodes for 2009 from BuddyTV.com and can’t wait to see them all.