Skip to content
I’m not very good at keeping the blog updated lately, sorry. It’s just not been easy to sneak into Blogger at work and blabber on about my weekend or my knitting.

Speaking of weekend, two Fridays ago Bernie and I drove to Abu Dhabi so that I could attend a surprise baby shower for Charmaine. More about that later. On our drive back, Bernie stopped at a petrol station so that I could take photographs of this beautiful sunset. Taken sans filter because I don’t have one that fits my new lens.

When I started knitting, everything I needed was bought locally. I was desperate to have knitting needles and yarn, any type of yarn and what did I know back then anyway? As long as the colour was nice and the price was not an issue I bought it. Then two months later I found out that not all needles and yarn are the same.

I browsed around so many yarn shops and bookmarked the ones who shipped directly to the UAE. One of the first ones was The Woolly Workshop. I bought the supplies first before I browsed at patterns. When I discovered Ravelry, all that changed. I discovered that yarn has different weights and material and use. I found out about circular knitting needles and DPNs. Ooh, and cable needles! And notions and all that sweet stuff that a knitter must have in her knitting bag. Or stash.

I have become a more discerning knitter when it comes to the types of yarn that I buy and knit with. If it’s going to be a lifelong hobby which gives me fulfillment and relaxation then I damn well should be using supplies that makes it all worth it!

The yarns I most stash include Blue Moon Fiber Arts Socks That Rock, Sundara Yarn and Malabrigo. I have a few others but these three brands are the dearest to my heart. I know those are what’s called snob yarns, but seriously once you’ve tried knitting with STR no other superwash sock yarn will feel as sproingy ever again, nor any worsted yarn would feel as buttery soft as Malabrigo (or Mally as we like to call it in the UAE!). And colours will never look the same again once you’ve feasted on Sundara’s genius creations. Over the last few months I have been seeing brand names in other blogs which make me want to try. One of them is Miss Babs Yummy Sock Yarn.

I went and browsed in her shop recently and came away having placed an order for the Frog Belly Monochrome colourway in the 2-ply sock and 4 skeins of the Solo worsted single ply in the Tiffany colourway. When I received my package I got a very nice surprise too!

The little purse is perfect for stitch markers or other notions, or even loose coins! There’s also that sample skein of what I think is the Yummy sport weight. Below is the Tiffany Solo worsted which I think I will knit up into a bag to be felted.

What do you think?

And my very first Miss Babs Yummy sock yarn. Yay! Will have to pet this one a few more times while I decide its fate. 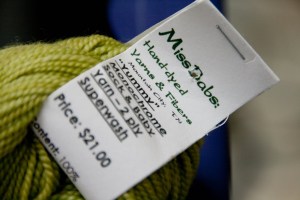 It is so pretty. Jackie said she was expecting the Sundara Sock Yarn in Prickly Pear to look more like this than what she actually got. And I have to agree.

And yes I have a finished project! Yay! It’s not my first shawl since I started knitting, but this is special in so many way. Let me run it down for you.

In summary, it’s a great knitting experience! I think I will make this again since at least my sister-in-law has commented a number of times on how she likes it. I will keep this one since it is the prototype and I know I made some mistakes in it. Just won’t feel right if I gave it away even as a gift if I knew there were stitches off.

Here it is pre-blocking. I finished casting off on the way back from the baby shower and the roadside stop we had to shoot the sunset was as good as any to photograph the shawl.

I used the numbers provided by Kate in her Ravelry project page to knit up a larger shawl. I was eyeing that shinking ball of yarn all the way down the Airport Road and this is how much I ended up with. That was close, huh?! 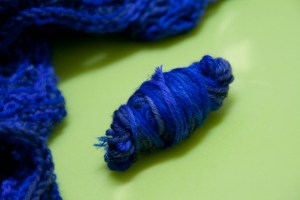 And here she is all blocked and dried. My sister-in-law modeled it for me right off the blocking wires!

From my Ravelry project page:
One thing about the pattern, it could have been my stupidity but I totally didn’t get the *k2tog 3 times, yo, k1 6 times, k2tog 3 times* part of the F&F edging correctly. I wondered why I was getting uneven amounts of stitches at the end of each side section and I knitted and frogged that first repeat of the F&F row three times until I spoke to Jackie and she explained it to me.

I totally felt like a loser when I realised that yo, k1 should be done 6 times together. In my defense shouldn’t there have been a bracket like so: (yo, k1) 6 times?

Anyway, it’s a small thing and I have forgiven myself for that moment of stupidity, granted it was a moment that lasted about a day or so.