Skip to content
It feels like cheating, really. I just finished two more projects this past weekend – one of them taking only a few hours of one evening to start and finish! But they are small projects so I feel like I’m cheating.

I needed a break from all the socks and some chatter in the UAE Ravelry Group about instant gratification projects got me thinking about doing one myself.

So I settled on a pattern (a free hat pattern too!) and pulled up some Socks That Rock Heavyweight leftovers from my February Lady Sweater. I swear that stuff just doesn’t seem to get over! I think I still have plenty to make another adult-sized hat! Anyway, I cast on just before settling down for a few episodes of Friends and just as Ross discovered about Chandler and Monica through the window of his new apartment, I was casting off. It took just 4 episodes.

This hat is a present to my niece, Isabelle because the Malabrigo Hat I made her last year is now too small for her. She grows up like a weed! I added a pom-pom just before blocking because you know me and pom-poms, we have a thing. 🙂

I hope Isabelle likes it!

Project: Thursday Evening Hat
Pattern: Saturday Afternoon Hat by J. Knits
Yarn: Socks That Rock Heavyweight
Colourway: Corbie, 0.5 skeins
Needle: 4.5mm
Notes: Knitted as per the pattern with the addition of a pom-pom on the top of the hat (not pictured here, sorry)

Officially I have knitted thirteen pairs of socks this year. Yay! I have exceeded my target for the year and with 4 months left to spare. It wasn’t a race against time or anything but man, sock-knitting is so addictive! It helped that the Socks That Rawk Group in Ravelry kept doing the KALs too so that made it easier for me to decide which patterns to knit. I can’t wait to see the candidates for the Q4 KAL.

So far I have knitted all the patterns that won the voting in all the KALs. To be honest, I didn’t think I would knit Cotty because a) the pattern wasn’t free and b) I was kinda avoiding doing the picot cuff. But then I had a look at all the FOs and decided that it is a pretty pair of socks and that I had a choice of doing other cuffs so I bought the pattern from Carrie and started knitting.

You would have already seen the first pair I made but I wanted to make one for me since the socks fit so nicely. I have this skein of STR Mediumweight which came in one lot of sock yarn destash a while ago. It was allw ound up into a cake but came without a ball band. The nice STR folks in Ravelry helped me identify the colourway as Love in Idleness.

It’s a pretty mix of a number of colours ranging from brownish-red, indigo, purple, teal, blue, green and a lot more in between. The repeats are rather short and since I was doing 60 stitches, I was worried about crazy pooling or flashes, but you know what it’s not too bad. I kinda like the way the socks turned out. 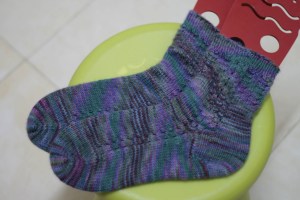 Project: Idle Hands are NOT the Devil’s Workshop
Pattern: Cotty Socks by Carrie Sullivan (aka Irishgirlieknits)
Yarn: Socks That Rock Mediumweight
Colourway: Love in Idleness, 0.85 skeins
Needle: 2.5mm
Notes: 1×1 rib on cuff for 15 rows, 6 repeats both on the cuff and legs before starting the heels, 12 repeats on the foot

I’ll be taking a break from socks for now, just working on and off on my daughter’s Eclipse socks but I will be working on two shawls and a baby item.

Maybe next year I will step it up to two pairs of socks a month.