Skip to content
Okay, so our flight for Manila was on the 22nd May. At least 3 weeks prior to that date we had to pack for our trip. The kids had to pack away everything they own as they were going to live and study in Manila and I had to pack for the trip as well as pack up the flat. Bernie and I were leaving the flat were we spent the most time in the UAE ever since we got here. Eight years is a long time even by UAE standards.

It was a difficult task as I had to figure out which goes to junk, which goes to charity and which goes to our baggage. The kids were a bit of help towards the end; I guess they were in denial about leaving the UAE for good. We ended up sending 3 boxes of stuff via sea cargo; they left a week before we flew out so we calculated that they would arrive while we were still in Manila so we can sort tem out. As it turns out the boxes arrived 6 weeks later! We missed it, but the kids have got everything under control and the best thing is that the flatscreen TV is in one piece!

This was the first time we were going through the new Terminal 3 of the Dubai International Airport, home of Emirates Airlines. As per our usual practice, we do our online check-in and then check-in our baggage at least 12 hours prior to the flight. This makes it easier for us esp when travelling with the kids to get up for flight day and not worry about hauling 7 pieces of baggage when all you really want is hop on the plane and just go.

The terminal is HUGE! There’s a lot of open space up front but very little else. The queue at the early check-in counter was not bad but there was a queue anyway. We were under-baggage so that was a relief. We got back to the airport at 8.30 the following morning along with family who wanted to see the kids off. As per our tradition, we had breakfast at the cafeteria and chatted while we wait for our boarding gate to open.

Ate Linell, Arvie, Patrick, Kuya Larry with my mother-in-law in the background

Of course, Bellybutton has to have her close-up! 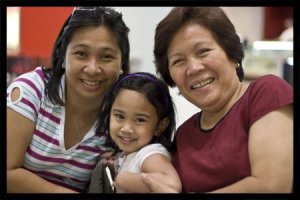 And she knows how to act in front of the lens!

She has grown up so much in the last few months! 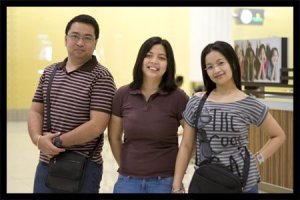 So did these 3! My brother, my cousin and my sister-in-law.

Patrick and me at the boarding gate

Bernie was bored. Can’t you tell? 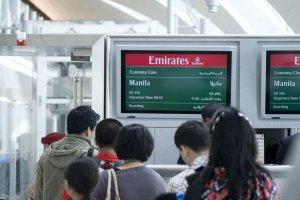 Yep, that’s our flight!
Interesting thing happened at the boarding gate. Me and kids walked on ahead while Bernie sorted out the boarding tickets. He signalled to me that there was a problem and I could not believe it was happening! I thought we were going to get bumped off the flight due to some error or whatever. As it turned out, we got bumped UP to business class! Woo-hooo! First time for everything, right? The problem was our tickets were booked in two groups: the kids which was a one-way flight and mine and Bernie’s which were return flights. No way I was leaving all 3 kids alone together in coach! So Bernie swapped places with Patrick.

Yep, the bubbly was flowing but I limited myself to two glasses only.

These babies were stretched out to the limit the whole way, good thing it was a direct flight too.

Patrick loved the noise-reducing earphones and when he found this in the playlist, he stuck to listening to Taylor Swift’s album over and over. Didn’t even watch a movie or played a game. 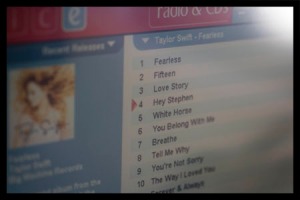 This is how Patrick looked like for most of the flight except when it was time for dinner or when hsi father was calling on the seat-to-seat phones. He slept like an angel too. 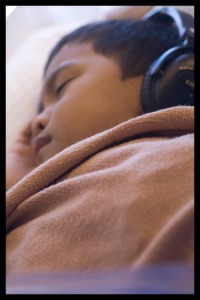 He woke up from a short nap to this and asked me to take a photo. The clouds were really awesome that day. 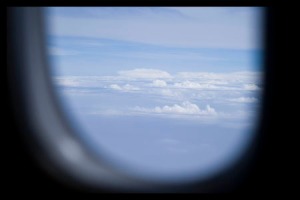 It was a great flight, but then again I don’t usually complain on flights. As long as I can sleep, get fed, go to the loo and not experience much turbulence then I’m a happy bunny. The flight was delayed though as 3 passengers were a no-show in Dubai so their baggage had to be located and off-loaded. My father was texting when we landed in Manila wondering where the heck we were!

And get this, when we came out of the terminal in Manila, Viel saw us standing across the road from the parking area so she sprinted out of the gate from the other side and came running…….to her brother and sister! She ran past me and into their waiting arms. If I weren’t tired from the flight I’d have cried my eyes out! She apologised after saying she didn’t see me. I can’t imagine how she’d have missed her size 18 mother! Or did I lose weight during that flight?

Okay, so this is the conclusion of Part 2. Parts 3 and 4 I will be something different, including someone I want to introduce to you. here’s a sneak peek.