It’s one of those lazy Fridays at home. Got no family get-together happening. Seems like we’ve had a bit too much of each other in the past couple of weeks so we’re taking a break from each other. I wonder how long it will last?

So I thought I’d blog about photos I’ve taken recently.

Over a round of coffees we talked about the usual things: what business would be good to start up back home, what we plan to do, places we plan to visit when we go home next month, etc etc. It seems that we always bring up the same ideas: a small restaurant, an internet cafe or a franchise of one of the most loved coffee or burger joints. In short, we have not decided, again. 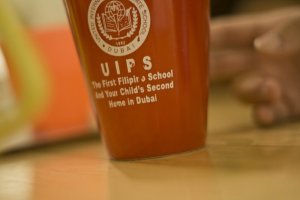 While the grown-ups were talking around the dining table, I ventured around to check on the kiddos. I found the 3 youngest boys busy with toys, what else? 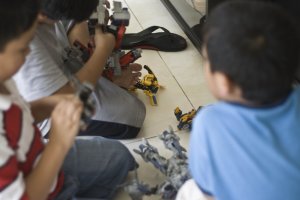 The older boys were in one of the rooms battling it out on the PS3. 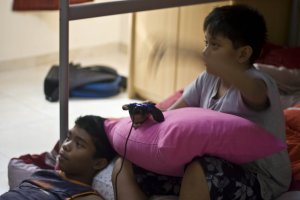 Isabelle was still grumpy so her photographs that day were not the best. I managed to sneak in this frontal shot though. Look at those big brown eyes! 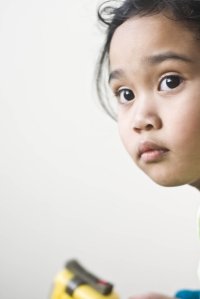 Then back to the dining table where I snuck candid photos of everyone. This is cousin Juvy, who is also Patrick’s godmother. She and her brother are going home today for a spot of vacation. 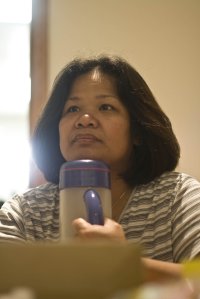 My sister and her husband, who is also Bernie’s younger brother in case you didn’t know that! 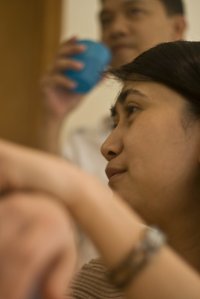 My brother-in-law Larry and his wife Linell. He was contemplating the cream puff which is supposed to be bad for him as he needs to watch his blood sugar levels. 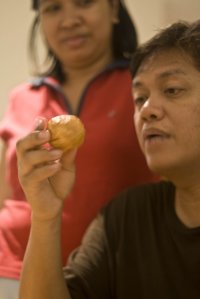 My mother-in-law contemplating the idea of opening up her own kitchen in the garage of the family house. She is a good cook and would have students and neighbours come in droves with her infamous Pancit Bihon recipe! 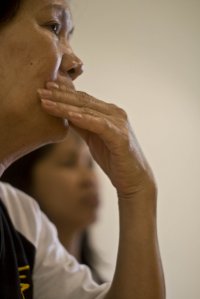 My husband Bernie, in case you didn’t know. 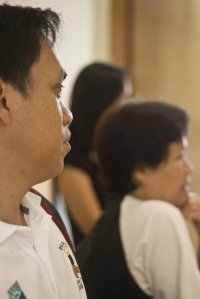 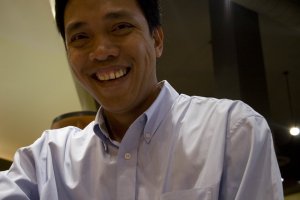 An unusual photo of me. Unusual because I rarely get my photo taken. Aibi caught me by surprise while waiting in queue at the Etisalat cash payment machine, which wasn’t working by the way. So if you’re at Deira City Centre and need to pay your Etisalat bills, go to the Kiosk at the Magic Planet end. They accept bill payments there. 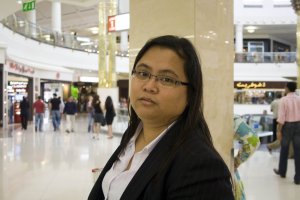 Patrick posing with my then-WIP. What a good sport eh? 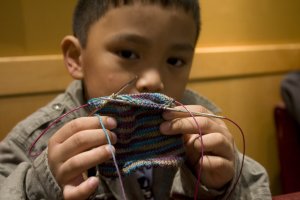 And I may have just cast on another pair of socks today. The Northern Lights shawl was not doing it for me so instead of seeing a crumply ball of frogged Sundara sock yarn, I decided to cast on immediately with the patternI saw last night – Spring Forward from Knitty Summer 2008.

A few knitters in Ravelry recently blogged about this so I thought I’d check the pattern our. It seems really easy so I printed it out and read it a bit. It asks for a gauge of 30sts/4in on 2.25mm. I usually get 32sts/4in on 2.25mm so I took a big gulp and pulled out my 2.5mm Harmony fixed circular (which Hala recently gave me in exchange of Addi Turbos 2.5mm) and cast on.

It’s going great so far. I needed a diversion from the Shur’tugals. And not plagiarising Wendy Johnson’s teddy/sock idea, I just needed a helper with my teeny start of a sock so I grabbed one of the teddies from the kids and ploppled the sock on top of his head. 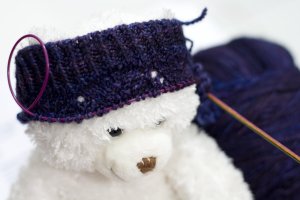