Skip to content
Have you ever been on a crabbing expedition? I have. Technically on two occasions, but officially I have not been to one where we actually caught crabs. The crustacean kind with snappers, by the way.

We joined some of Bernie’s basketball buddies and their families last Thursday evening for said crabbing expedition. Full story and more photos to follow. Here’s a teaser for now. 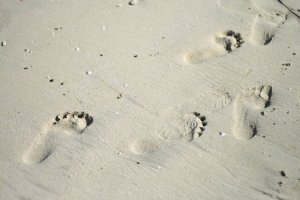 Not my footprints
On to knitting news, I have finished my Rockin’ February Sweater. Yay me! Here is a photo of the buttons finally sewn into place. I do love them! 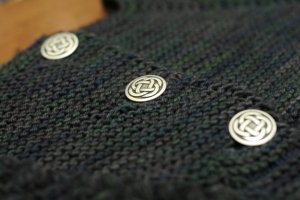 Here is the finished Lady just before I gave her a bath. Seriously I am not miffed about the shift in the dyelot. It’s a design flaw which practicality trumps every time so I am sticking with this cardigan. I know I need to get model shots but I will do them out and about and not in our poorly lit flat.
And like I said on Twitter, I am wearing it right now and, if I could, I would not take it off. Ever. 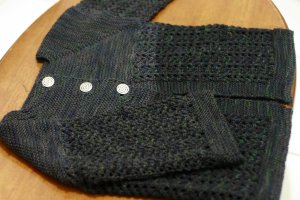 That brings us to ‘seekrit’ projects. This here is College Girl Vest for my, well, college girl using Hilja’s Vest pattern and Dream in Colour Classy. After I cast off on the FLS, it spurred me on to take on another large-ish garment project. I have a deadline for this one as we are going home to Manila in May so will need to have it done and blocked at least by the 20th May. It’s going really well and I have started the increase rounds today. 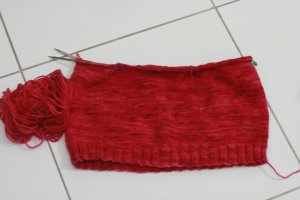 Here’s a sneak peek into a not-so-seekrit project: A skein of Socks That Rock Mediumweight in Jasper which will turn into Aibi’s FLS. I swatched the other night and got gauge (yay!) so the needles and cable have been set aside. This is probably the project I will take with me to Manila. Along with a pair of socks. 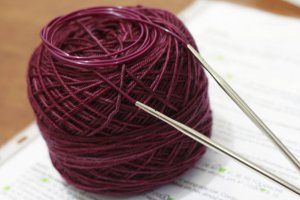 How’s everyone else doing with their February Lady Sweaters?