Skip to content
The company held its first Investment Seminar in 2009 for clients last night at the Kempinski Hotel, Mall of the Emirates. It’s a smaller affair than the one in November but it was still a good turn out.

Here’s a teaser, funnier photos to follow once I get them all downloaded from the camera. 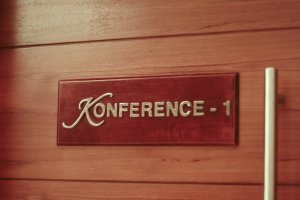 Sundara Yarn ran a campaign during the month of February where she offered large batches of limited edition yarn in different bases and wonderful array of colours. Because of the unbelievable demand for her hand-dyed skeins and her location on the map, I was only able to grab yarns on one offering when she opened her store at night Seattle time. This meant it was morning here in Dubai and most of her customers in the US east coast and Europe were in bed. Yay me!

It was a trial run and I think Sundara would do it again next year as it is a good way to clear her stash of yarn and also give a chance to buy yarn for those who cannot subscribe to her collections. You just have to be super quick or else those skeins in your Paypal cart will disappear one by one right before your eyes. There were plenty of offering on the 8th Feb but these were the only ones I could afford!

Undoubtedly the reigning Queen of My Stash at the moment: a skein of 100% Silk Lace in a very rich, dreamy shade of red-purple. It’s called Pure Temptation. Go on, look at it and I dare you to not fall in love with it.

I have been studying the Shetland Triangle pattern since I got this yarn but it’s a challenge for me because it’s made up of charts. And me and charts are like oil and water. But for this glorious skein I might just be forced to take a crash course on Chart Reading 101.

I discovered recently that Sundara Sock Yarn is a delightful base to knit with so when she offered Limited Edition sock yarns I just had to grab one. This little beauty caught my eye – and my wallet. It’s a pretty shade of blue, the most brilliant skein of blue in my stash right now – and it’s called Vibrant Vixen.

I changed my mind about using Cerulean Seas for the Zigzag Anklets and I’m going to use this one instead. 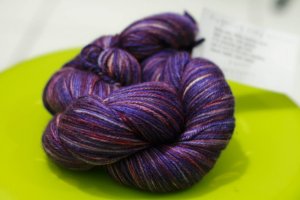 On the actual knitting front, I made progress with the Opal socks. First up, the project name changed if you noticed my sidebar. My sister pointed out that there is no way our father could put these socks on himself unless a miracle happened. After his hip replacement surgery a few years ago, our father has avoided bending at the hips or knees for fear of everything crashing down on him. Hence, only slip-on shoes, no fiddly shoelaces for him.

He can still put on socks but prefers really stretchy ones. When my sister tried this on one day, she unashamedly coveted them. So now they’re called The Project Formerly Known As Father Socks.

This project was supposed to be February’s pair of socks but since that month is short I had to eat into March. But because I’m a slow knitter and I procrastinate a lot and I have startitis, the socks are not done still. What’s more, I was ready to start the toe decrease when I noticed that the second sock was bigger than the first.

Because I stupidly forgot to work the gusset decrease rounds.

So, 6.5 inches into the foot, the second sock and I took a trip to the edges of the frog pond. I was going to close my eyes and pretend I didn’t see it and hope that my sister, complete knitting ignoramus that she is, would never notice. But who was I kidding? I will know. It will eat me up slowly, building up the guilt slowly but surely until one night I would wake up screaming, drenched in sweat when I will pick up the phone, call my sister and insist she give me back the sock first thing the following day so that I can make things right.

I’m glad I spared myself all that torment. Here they are as of last night. Today, I am 5 rounds away from the toe decrease and everything is looking good. 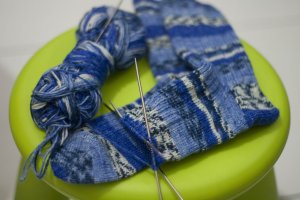 What about you? What’s on your needles today?