Skip to content
Love:
Caribou Cafe, esp a large cup of Mint Condition. Their Espresso Truths win my vote. This particular one rings true every single day for me. 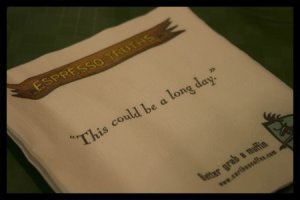 My kids. We helped celebrate my sister-in-law’s birthday recently. Simple buffet dinner, catching up and having fun. Surprise surprise, my brother didn’t make any of the kids cry this time! He usually jokes with them to the point that the jokes make the kids cry. Maybe my little bro’s finally grown up. 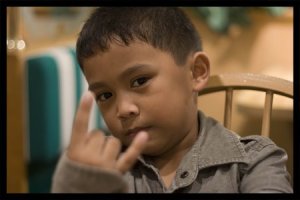 Aibi and Joseph with what they call their Abu Sayyaf scarves – oooh, see how my blog suddenly pings the anti-terrorist watch!

Paintball Day with the guys from the office.

Scott organised it (I organised the bus!) and although the turnout was less than expected, we still had two decent 10-man teams.

We had to wear these masks to obviously protect our faces, eyes and ears. But it was hot and so difficult to breathe in them. 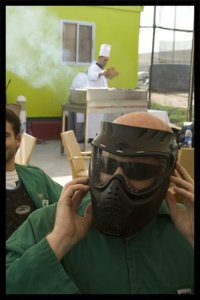 The teams waiting to be briefed on the rules of engagement. Tim and Phil led the beige team and Andy and Scott with the green team. I was with the greens. 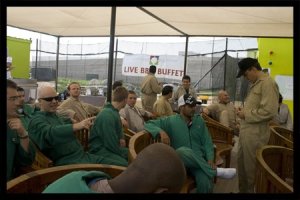 Because I couldn’t trust anyone with my camera, I don’t have any action photos. I’m waiting for Olga to send me her photos. At the end of the four 10-minute games, we had buffet! Yay! Grilled chicken, fish, beef and Arabic starters were served. Yummy. 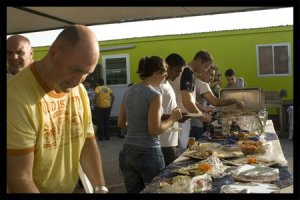 My boss usually has a great dress sense but this time he traded it for a sense of humour.

Of course there were badges of war. I got hit in three places by That Damn Texan (Dave Burke) who snuck around a deserted house and fired at me and Raju at less than 5 meters away. He was not supposed to fire within 5 meters. He did apologise afterwards saying he got carried away.

Bruise #1. Not painful at all actually. The pain was minimal at the time I got hit, like someone threw a rock at you really hard and then nothing. The bruise looks worse than it really is. This was on the way home after the event. 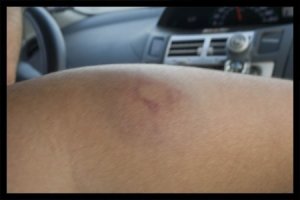 Day 2, Bruise #2. I think this was not a direct hit, otherwise the bruise would be bigger.

Day 4, Bruise #1. Trust me, it looks worse than it it feels. Bruise #3 is on my side, by the rib cage. No photo of that, sorry but it’s not too visible because I did have the body padding to soften the blow a bit.

Would I go paintballing again? Hell yeah! We’d definitely do it again because everyone who came had a fabulous time. It’s good for team-building and for getting back at the nobs in the office!