Skip to content
Last night I picked up my Just Enough Ruffles knitting with the intention of doing a few short rows before I tackle another project. Because this is mostly mindless knitting, apart from being careful to watch out for the wrapped ends, I knit when we are in the car on the way to work at 6am before the sun is even up.

Seeing purl bumps on a stockinette side made me want to rip my hair out, scream and throw something at the wall at the same time.

Mostly I wanted to kick myself for not giving the project the attention it deserves.

Okay, yarn p0rn time. I decided that I will knit with my precious Sundara yarns this year so I decided to wind the skeins into balls. This is the first mailing of the Seasons Collection, Cerulean Seas sock yarn which I want so much to knit into a Lace Ribbon Scarf after seeing them in Ravelry. 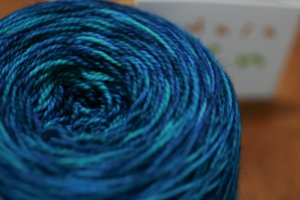 Someone in Ravelry said that this colourway looks like raw meat. This is Candied Chrome in sock. I kinda like it now, it’s grown on me already. I’m thinking about a lacy shawl with this one, not sure which pattern yet.

The photo is a bit too dark

Friday means we were out and about today. The family wanted to catch some of the lovely breakfast at Ikea but when we got there they stopped serving breakfast, so we had lunch instead. 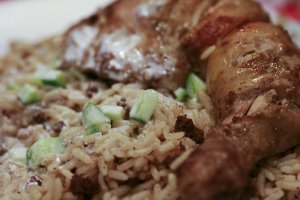 This was my lunch : oriental rice with grilled chicken and cucumber yoghurt

Someone left the newspaper, perhaps for someone else to read?

We caught up with my sister and the kids but we’ll be spending a day at the park tomorrow anyway so we went our separate ways. And then we went on to the Dubai Mall, mainly because Aibi really wants to see Kinokuniya. The parking level we found was right on the food court side. This sign made me giggle.

They provide ‘wrapid’ service too!
This time around at Kinokuniya I managed to find the knitting books. I almost screamed when I found the Yarn Harlot’s The Secret Life of a Knitter. There were only two copies. I also picked up Mason-Dixon Knitting, The Curious Knitter’s Guide. There were a few more than I wanted but I have almost reached my knitting budget for the month so I had to hide the books I wanted at the very back of the shelves to make sure no one else can get to them. 🙂
For tomorrow’s day at the park, I wanted pork barbecue along with the fish. Outside Choitram’s this is what we found.

Watching us from afar

Because I had the 70mm with me, nothing escaped the macro settings. Not even this poor sprig of parsley from Aibi’s sushi box.

Help! The mad one-eyed woman won’t let go of me!