Skip to content
Dear Blog, Did you miss me? Because I sure did miss you! Love, Me

It has been the usual crazy around these parts but with a few extra bits thrown in like rain for instance (yes, it does rain in Dubai!). And not just any old rain, lightning and thunder came along too! This of course meant that drivers on the road got a bit crazy because those who were born and grew up here and have never been any place where rain is a staple don’t know how to drive in wet, slightly slippery, sometimes flooded streets! Fun times.

The sun took a vacation for the past week and I think only came back today. Looks a little sluggish I think but I’m sure he’ll get back into the swing of things. This of course meant that for the past week or so it has been really cold, like 6 degrees in the early morning and late evening cold. I know that’s nothing to brag about when you get -10C in places up north, but this is Dubai, folks. We break out the woolly wardrobe once the sun starts setting at 5pm.

The ancient Greek philosopher Plato said that necessity is the mother of invention. Never more true than in my case. My hands are cold when we leave in the morning and when I go home at night. So I grabbed some leftover yarn, in this case the Artyarns Supermerino from my husband’s Thujas, and whipped myself up a pair of Toasties.

I love these things! Not only do they knit fast, but they are really warm. One of the best lessons I learned in this wee project is how to avoid holes when doing the thumb. One near-disaster was running out of the Supermerino. I rummaged through the stash to find a suitable yarn and was thinking about using something funky like the dyed pink wool from Isabelle’s Toasties when I found my leftover Crystal Palace Fjord in Vine Green. Whee! The gauge is about half a stitch off but the colour is perfect so I don’t mind.

My aim to knit a pair of socks a month is still possible. The Leyburns are idling a bit while I take care of more important stuff but I did turn both heels, finally! After much fudging abot of stitch counts, knitting and ripping two types of heels, I finally settled on the standard short row heels as described by Laura Chau here. The double-wraps helped a lot and apart from a small hole on one end of the gusset I think this one is the best heel by far. I hope to finish the pair this weekend and then start on the next one. 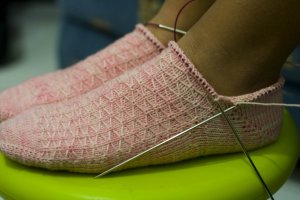 And now for photos other than my knitting. I love how the waterfall in this shot sort of gets frozen into this kind of fuzzy wall. Used Tv setting on this. The kids added a nice foreground.

My brother-in-law Obet bought Patrick a pair of Heelys trainers, you know the one with the wheels? He’s been learning how to use them when we go to the malls on weekends. He would hold on to me or his father while he practiced hot to position his feet and legs. And then one day, a couple of weeks ago, I told him to let go of my hand because he could do it anyway. And he did. And he glided a couple of feet away from me. All on his own. Yay! And now, he wheels around all the time when he is wearing the Heelys.

The Dubai Festival City has a small arcade/game/rides area installed along the marina walk. It’s quite a feast for the eyes when the lights are all on, especially against the dark sky at night. It was chilly too when we went there last Friday! They did have an ice rink under the stars but it was too damn cold so Aibi decided not to go.

I love this shot of the marina because of the lights reflecting on the water.

Watching Obama’s Inauguration on CNN now. I just know that at some point I will cry a bit. This is history in the making and despite not being American I never thought I’d witness something like this in my lifetime. The hope and belief of so many Americans and citizens of the world on Barack Obama is overwhelming and I think something that he can use to urge him on even in his most trying days.

The whole world will be watching closely for the next four years and I am sure I will be right there alongside everyone else in hoping he will succeed in every way.